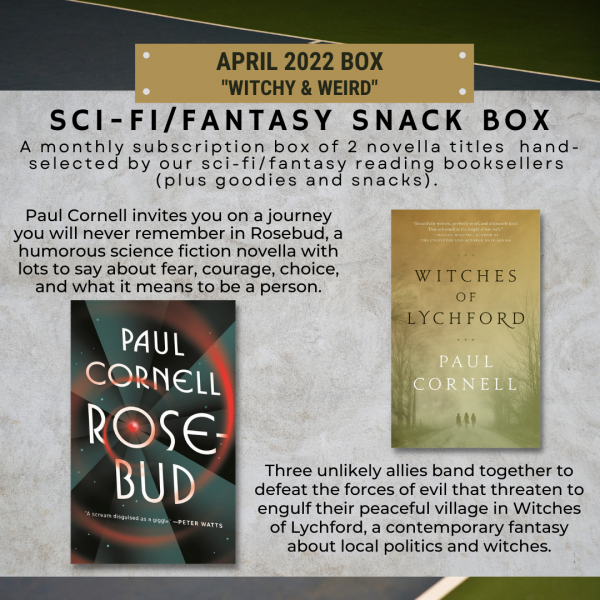 Paul Cornell invites you on a journey you will never remember in Rosebud, a humorous science fiction novella with lots to say about fear, courage, choice, and what it means to be a person.

Three unlikely allies band together to defeat the forces of evil that threaten to engulf their peaceful village in Witches of Lychford, a contemporary fantasy about local politics and witches.

A multilayered, locked-room science fiction novella in which five digital beings unravel their existences to discover the truth of their humanity.

“The crew of the Rosebud are, currently, and by force of law, a balloon, a goth with a swagger stick, some sort of science aristocrat possibly, a ball of hands, and a swarm of insects.”

When five sentient digital beings—condemned for over three hundred years to crew the small survey ship by the all-powerful Company—encounter a mysterious black sphere, their course of action is clear: obtain the object, inform the Company, earn lots of praise.

But the ship malfunctions, and the crew has no choice but to approach the sphere and survey it themselves. They have no idea that this object—and the transcendent truth hidden within—will change the fate of all existence, the Company, and themselves.

Witches of Lychford by Paul Cornell

Three unlikely allies band together to defeat the forces of evil that threaten to engulf their peaceful village.

The villagers in the sleepy hamlet of Lychford are divided. A supermarket wants to build a major branch on their border. Some welcome the employment opportunities, while some object to the modernization of the local environment.

Judith Mawson (local crank) knows the truth -- that Lychford lies on the boundary between two worlds, and that the destruction of the border will open wide the gateways to malevolent beings beyond imagination.

But if she is to have her voice heard, she's going to need the assistance of some unlikely allies...

The Idea: Every month, there will be a box of 2 novella titles handselected by our sci-fi/fantasy reading booksellers (plus goodies). These titles will be announced in advance. At least one title (if not both) would be a new book released that month. 24 books curated a year seems like a lot, I don't know... The nice thing about novellas is that they can be read in an afternoon and they're a little like potato chips: you can't read just one. For $35, you can order one time or forever - no commitment, no pressure.

How Will It Work: The cost of the Sci-Fi/Fantasy Snack Box is $35/month.  We are offering free pickup in store and free local delivery within 5 miles of Copper Dog Books as well as shipping via media mail, ground, or priority.  You can order a month at a time or create a subscription with a recurring monthly charge to your credit card.  If you are selecting subscription, you must save your credit card information to your account in order for subscription shipments to be sent.  If the credit card information is not saved, there may be a slight delay in shipment as we will need to reach out to you to obtain payment information.