Looking for a enemies to lovers romance, a Shakespeare retelling and a cutting commentary on the racial, political, and class divides facing this country today? Meet Ben and Beatriz. We are so honored to host the lovely Katalina Gamarra for a Ben and Beatriz book signing!  Event is free, get your tickets here! 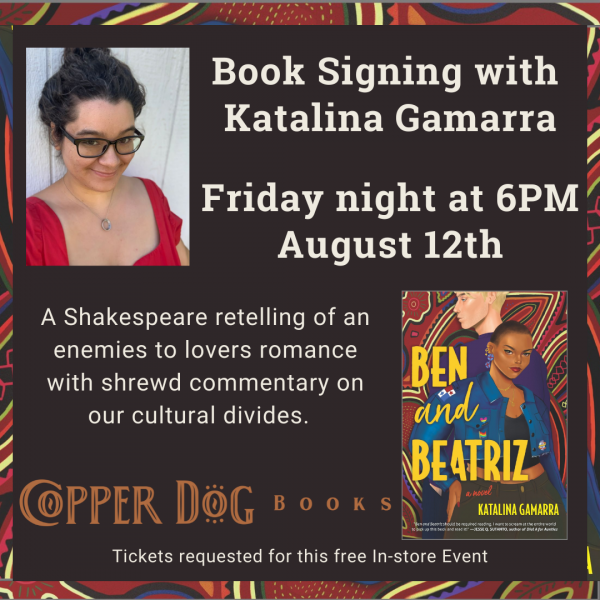 Beatriz Herrera is a fierce woman who will take you down with her quick wit and keen intellect. And after the results of the 2016 election worked hard to erase her identity as a queer biracial woman, she'd be right to. Especially if you come for her sweet BFF cousin, Hero. Beatriz would do anything for her, a loyalty that lands Beatriz precisely where she doesn't want to be: spending a week at the ridiculous Cape Cod mansion of stupid-hot playboy Ben Montgomery. The same Ben Montgomery she definitely shouldn't have hooked up with that one time... The things we do for family.

White and wealthy, Ben talks the talk and walks the walk of privilege, but deep down, he's wrestling with the politics and expectations of a conservative family he can't relate to. Though Beatriz's caustic tongue drives him wild in the very best way, he's the last person she'd want, because she has zero interest in compromising her identity. But as her and Ben's assumptions begin to unravel and their hookups turn into something real, they start wondering if it's still possible to hold space for one another and the inescapable love that unites them.

This retelling of Shakespeare's Much Ado About Nothing is both razor-sharp and swoon-worthy: the perfect love story for our time.

Katalina Gamarra is a writer whose debut novel, Ben and Beatriz, is a contemporary reimagining of Much Ado About Nothing. She earned a BA in English from Drew University where she received accolades for both creative writing and academic prowess, as well as an award in Shakespeare Study. Her work has been published on Thought Catalog and Verge of Verse and before becoming an author, she worked in bookselling, literary scouting, manuscript reading, and galley critiquing. She lives in Boston with her husband, cat and dog.