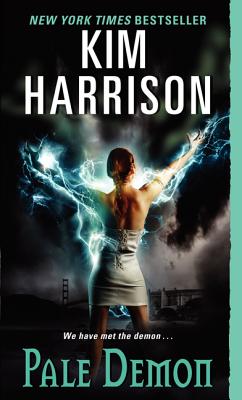 This is book number 9 in the Hollows series.

"I wouldn’t miss a Kim Harrison book for anything."—Charlaine Harris, author of the Sookie Stackhouse novels

New York Times bestselling urban fantasy superstar Kim Harrison is back with Pale Demon—her ninth electrifying adventure featuring contemporary witch Rachel Morgan. This time Rachel's leaving the Hollows, on a cross-country road trip with a pixy, an elf, and a vampire, as she races to clear her blackened name at a California witches' convention in order to avoid an eternity of torment at the claws of a soul-devouring demon. Pale Demon is Kim Harrison at her gothic best—combining mystery, action, intrigue, paranormal romance, and breathtaking dark fantasy in a delicious witches’ brew that fans of Laurell K. Hamilton, Charlaine Harris, Stephenie Meyer, and Jim Butcher simply will not be able to resist.

Kim Harrison is best known as the author of the #1 New York Times best selling Hollows series, but she has written more than urban fantasy and has published more than two-dozen books spanning the gamut from young adult, accelerated-science thriller, several anthologies, and has scripted two original graphic novels set in the Hollows universe. She has also published traditional fantasy under the name Dawn Cook. Kim is currently working on a new Hollows book between other, non related, urban fantasy projects.

“Elegant and taut as a gymnast’s cartwheel, Harrison’s polished prose drives a story that will have readers swerving in their seats every time Rachel turns the wheel.” — Publishers Weekly (starred review)

“With more than 2.5 million “Hollows” books in print, Harrison has definitely tapped a nerve — or a magical ley line.” — San Antonio Express-News on Pale Demon

“An excellent entry that is guaranteed. … The Rachel Morgan series is fast becoming one of the hottest tickets in the urban-fantasy subgenre.” — Booklist (starred review)

“You’ll love this bounty-hunter team. . . . A fun-fair ride through a fascinating version of our world.” — Charlaine Harris on Dead Witch Walking

“Blends the best qualities of Anita Blake and Stephanie Plum. . . . Kim Harrison carries it off with style.” — Jim Butcher on Dead Witch Walking

“Dead Witch Walking is a wonderfully fun romp through the supernatural world, a spellbinding blend of sharp wit and vivid imagination that left me eagerly awaiting the sequel.” — Kelley Armstrong on Dead Witch Walking