The Lace Reader: A Novel (Paperback) 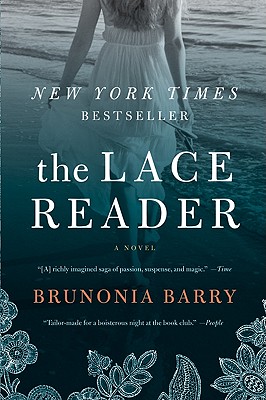 The Lace Reader: A Novel (Paperback)

“The Lace Reader is a suspenseful intense read that thoughtfully mixes New England history and lore with the present. This is a one-sitting, must-discuss-afterward type of book!”
— Angela Rodman, Third Street Books, McMinnville, OR

“Set in past and present Salem, Massachusetts, the story takes off immediately, interspersing splendid detail about the history of lace makers, as well as the famous witch trials, with the modern story of a family's intricate history. The novel is packed with interesting characters (including modern witches) and many plot lines, which come together magnificently at the conclusion. A truly amazing and riveting read.”
— Karen M. Frank, Northshire Bookstore, Manchester Center, VT

“Set in past and present Salem, Massachusetts, the story takes off immediately, interspersing splendid detail about the history of lace makers, as well as the famous witch trials, with the modern story of a family's intricate history. The novel is packed with interesting characters (including modern witches) and many plot lines, which come together magnificently at the conclusion. A truly amazing and riveting read.”
— Karen M. Frank, Northshire Bookstore, Manchester Center, VT

In the tradition of The Thirteenth Tale, Brunonia Barry’s bewitching gothic novel, The Lace Reader, is a phenomenon. Called “[a] richly imagined saga of passion, suspense, and magic” by Time Magazine, it is a haunting and remarkable tale told by an unforgettable, if strangely unreliable narrator—a woman from an enigmatic Salem family who can foretell the future in patterns of lace. The Lace Reader was a runaway New York Times bestseller—hitting the top lists in major cities across the country, from Boston to Chicago to Los Angeles—and has immediately established debut author Brunonia Barry as a major force in contemporary American fiction.

Born and raised in Massachusetts, Brunonia Barry lives in Salem with her husband and their beloved golden retriever, Byzantium.

“A spine-tingler set in Salem...[with] an irresistible pull...The Lace Reader is tailor-made for a boisterous night at the book club.” — People (People Pick)

“Suspenseful and literary catnip-for-book-clubs...while it’s surprisingly gritty for having “lace” in the title, we’re calling this now as the beach read of ’08.” — New York magazine

“An engrossing modern-day twist on the classic Gothic novel….the story both astonishes and satisfies. In short, The Lace Reader is great entertainment.” — Tampa Tribune

“Finely rendered moments make this a novel to savor—a story as textured as it is imaginative... a story that readers will find as lovely as a swatch of handmade lace.” — Rocky Mountain News

“Brunonia Barry has pulled off a major feat with her debut, The Lace Reader: It’s a gorgeously written literary novel that’s also a doozy of a thriller, capped with a jaw-dropping denouement that will leave even the most careful reader gasping.” — Dallas Morning News

“What makes Brunonia Barry’s compulsively readable debut even more interesting is the spice added by fillips both psychic and supernatural.” — Denver Post

“The Lace Reader casts an enthralling spell...As The Lace Reader unspools, we are drawn into a whirling vortex of deceit. Barry untangles these confusing strands of mystery with an artful precision.” — Minneapolis Star Tribune

“Barry excels at capturing the feel of smalltown life, and balances action with close looks at the characters’ inner worlds. Her pacing and use of different perspectives show tremendous skill and will keep readers captivated all the way through.” — Publishers Weekly, starred review

“Surprise endings are tough to pull off--too often they aren’t a surprise to anyone but the main character. To Barry’s credit, she genuinely got me.” — Christian Science Monitor

“An ambitious debut. Unusual and otherworldly, this is a blizzard of a story which manages to pull together its historical, supernatural and psychiatric elements. A survivor’s tale of redemption.” — Kirkus Reviews

“Barry does a fantastic job of sketching out her characters. The Whitney women, one and all, are intriguingly real.” — San Antonio Express-News

“A ‘romance’ in the Nathaniel Hawthorne sense of the word a dark tale of sin and guilt that blends the mundane and the fantastic, with a glimmer of redemptive hope at its core that all the Gothic trappings cannot obscure.” — Tulsa World

“Barry has written a meditative, lyric novel that in its discursive storytelling style full of digressions and expository sections on interesting facts will appeal to people who enjoy savoring a book one section at a time.” — Raleigh News & Observer

“The Lace Reader unravels a magical, yet tragic family’s tale...Barry has cleverly and delightfully set us up. With one fell swoop, she cuts the last thread, and the characters she has so carefully created unravel to reveal secrets we had not even begun to guess.” — Milwaukee Journal Sentinel

“A gorgeously written literary novel that’s a doozy of a thriller, capped with a jaw-dropping denouement that will leave even the most careful reader gasping.” — Chicago Tribune

“Past and present mysteries merge in a fast-moving narrative that builds through a numerous small dramas to a theatrical conclusion.” — Katherine Turman, Elle

“The Lace Reader is a page-turner, and the ending is almost as shocking as the film The Sixth Sense.” — Salem Gazette

“Barry’s depictions of her characters’ altered states of consciousness are beautifully rendered. And “The Lace Reader” establishes Brunonia Barry as a force...” — The Olympian

“With THE LACE READER, Brunonia Barry plunges us through the looking glass and beyond to a creepy and fascinating world. Prepare to meet strange, brave, bruised, electrically alive women there. Prepare to be riveted by their story and to live under its spell long after you’ve reached its astonishing end.” — Marisa de los Santos, author of Love Walked In and Belong to Me

“Barry’s novel is that rare thing—a literary page-turner worthy for it’s story and for its art.” — Tom Jenks, editor of Narrative magazine

“Evocative, layered, smart, and astonishing, THE LACE READER is a fever dream of a novel that will haunt me for a long time to come. The Salem, Massachusetts that the Whitney women inhabit is a wild, dark place, and I loved every moment that I spent there.” — Joshilyn Jackson, author of The Girl Who Stopped Swimming

“What is real in The Lace Reader? What is not? To her credit Ms. Barry makes this story blithe and creepy in equal measure.... And there is much suspense invested in where all the lacunas in Towner’s impressions will lead her...There are clues planted everywhere.” — New York Times

“Barry’s modern-day story of Towner Whitney, who has the psychic gift to read the future in lace patterns, is complex but darker in subject matter.... The novel’s gripping and shocking conclusion is a testament to Barry’s creativity.” — USA Today