The Sister Wife: Brides of Gabriel Book One (Paperback) 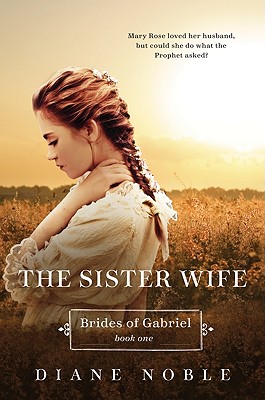 The Sister Wife: Brides of Gabriel Book One (Paperback)

This is book number 1 in the Brides of Gabriel series.

The Sister Wife is the first book in a new Brides of Gabriel historical series set during the formation of the Mormon edict of polygamy. Award-winning author Diane Noble explores the inner conflicts, emotions, and decisions of three women married to the same man. A moving tale of faith and doubt, love and commitment for fans of Big Love or those who devoured Carolyn Jessop’s Escape, The Sister Wife follows a budding family living in close community with the controversial Mormon prophet Joseph Smith as they are pulled deeper into the world of polygamy.

Diane Noble is a former double finalist for the prestigious RITA Award for Best Inspirational Fiction, a finalist for the Romantic Times Career Achievement Award and the Reviewers' Choice Award, and a three-time recipient of the Silver Angel Award for Media Excellence. With more than a quarter million books in print, Diane lives in Southern California with her husband.

“Diane Noble not only explores the early days of the Mormon church; she also probes deeply into the human heart... the pages turn faster and faster…right up to the breathless conclusion and the promise of more drama to come.” — Liz Curtis Higgs, best-selling author of Thorn in My Heart

“Diane Noble is at her best in The Sister Wife. I found myself transported by the richness of her words, the authenticity of her research and the depth of her spirit. Well done!” — Jane Kirkpatrick, award-winning author of An Absence So Great

“The first book in the Brides of Gabriel series introduces us to the foundation of polygamy in Mormonism. A well-researched, gripping story written with depth of emotion, it tactfully illustrates different belief systems and explores plural marriage without sensationalizing it.” — Romantic Times BOOKclub

“The Sister Wife is the first in Noble’s Brides of Gabriel series, which, given the popularity of Big Love—the HBO television drama about a fundamentalist Mormon family in Utah—should be a big hit with readers.” — Booklist