The Chain: Farm, Factory, and the Fate of Our Food (Paperback) 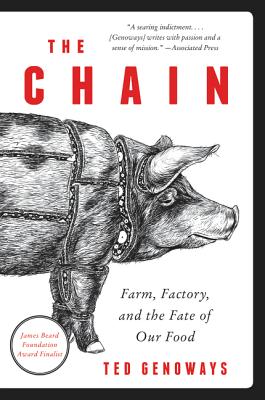 The Chain: Farm, Factory, and the Fate of Our Food (Paperback)

“A worthy update to Upton Sinclair’s The Jungle and a chilling indicator of how little has changed since that 1906 muckraking classic.” — Mother Jones

“I tore through this book. . . . Books like these are important: They track the journey of our thinking about food, adding evidence and offering guidance along the way.” —Wall Street Journal

On the production line in American packing-houses, there is one cardinal rule: the chain never slows. Under pressure to increase supply, the supervisors of meat-processing plants have routinely accelerated the pace of conveyors, leading to inhumane conditions, increased accidents, and food of questionable, often dangerous quality.

In The Chain, acclaimed journalist Ted Genoways uses the story of Hormel Foods and its most famous product, Spam—a recession-era staple—to probe the state of the meatpacking industry, from Minnesota to Iowa to Nebraska. Interviewing scores of line workers, union leaders, hog farmers, and local politicians and activists, Genoways reveals an industry pushed to its breaking point—while exposing alarming new trends, from sick or permanently disabled workers to conflict between small towns and immigrant labor. A searching exposé in the tradition of Upton Sinclair, Rachel Carson, and Eric Schlosser, The Chain is a mesmerizing story and an urgent warning about the hidden costs of the food we eat.

Ted Genoways served as the editor of the Virginia Quarterly Review from 2003 to 2012, during which time the magazine won six National Magazine Awards. He is a contributing editor at Mother Jones and an editor-at-large at OnEarth, and is a winner of the James Aronson Award for Social Justice Journalism. He is a fourth-generation Nebraskan and lives in Lincoln.

“Ted Genoways has crafted an unflinching, intimate portrait of America’s industrialized meat system, centered on pork but conveying lessons that go beyond it. The Chain is a must-read for anyone concerned with our nation’s food system, and the phenomenal cost—animal, human, and environmental—of cheap meat.” — Tracie McMillan, author of The American Way of Eating

“An exhaustive examination of this industry. . . . Readers curious about meatpacking and agriculture as well as the social, economic, and environmental impacts of the food industry will find Genoways’s nonfiction debut a valuable and stimulating read.” — Library Journal (starred review)

“A searing indictment . . . [Genoways] writes with passion and a sense of mission . . . He should get people thinking about the trade-offs that the public makes in return for low-cost meat.” — Associated Press

“Formidably researched and vividly told, The Chain is the definitive story of American pork. Ted Genoways intercuts intimate portraits of towns and factories with longer views of labor, business, and immigration history, making painfully clear the true cost of the ‘other white meat.’” —  Ted Conover, author of The Routes of Man

“A muckraker for our times, Ted Genoways goes behind the scenes in the meatpacking industry and shows us how the sausage is really made—and the Spam, too. But he doesn’t stop there, because The Chain is also an insightful chronicle of a changing American heartland, and of lives trampled in the headlong rush to industrialize the food system. Upton Sinclair would surely approve.” — Dan Fagin, Pulitzer-prize winning author of Toms River

“A worthy update to Upton Sinclair’s The Jungle and a chilling indicator of how little has changed since that 1906 muckraking classic.” — Mother Jones

“A scathing report on the consequences of factory farming. . . . A sad, horrifying story, a severe indictment of both corporate greed and consumer complacency.” — Kirkus Reviews

“Comparable to Sinclair’s classic expose, The Jungle, Genoways’s blistering account of the meatpacking industry makes the case for tighter monitoring of this powerful sector of American agribusiness.” — Publishers Weekly