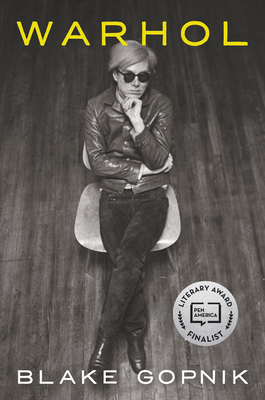 The definitive biography of a fascinating and paradoxical figure, one of the most influential artists of his—or any—age

To this day, mention the name “Andy Warhol” to almost anyone and you’ll hear about his famous images of soup cans and Marilyn Monroe. But though Pop Art became synonymous with Warhol’s name and dominated the public’s image of him, his life and work are infinitely more complex and multi-faceted than that.

In Warhol, esteemed art critic Blake Gopnik takes on Andy Warhol in all his depth and dimensions. “The meanings of his art depend on the way he lived and who he was,” as Gopnik writes. “That’s why the details of his biography matter more than for almost any cultural figure,” from his working-class Pittsburgh upbringing as the child of immigrants to his early career in commercial art to his total immersion in the “performance” of being an artist, accompanied by global fame and stardom—and his attempted assassination.

The extent and range of Warhol’s success, and his deliberate attempts to thwart his biographers, means that it hasn’t been easy to put together an accurate or complete image of him. But in this biography, unprecedented in its scope and detail as well as in its access to Warhol’s archives, Gopnik brings to life a figure who continues to fascinate because of his contradictions—he was known as sweet and caring to his loved ones but also a coldhearted manipulator; a deep-thinking avant-gardist but also a true lover of schlock and kitsch; a faithful churchgoer but also an eager sinner, skeptic, and cynic.

Wide-ranging and immersive, Warhol gives us the most robust and intricate picture to date of a man and an artist who consistently defied easy categorization and whose life and work continue to profoundly affect our culture and society today.

Blake Gopnik, one of North America’s leading arts writers, has served as art and design critic at Newsweek, and as chief art critic at the Washington Post and Canada’s Globe and Mail. In 2017, he was a Cullman Center Fellow in residence at the New York Public Library, and in 2015 he held a fellowship at the Leon Levy Center for Biography at City University of New York. He has a PhD in art history from Oxford University and is a regular contributor to the New York Times.

John Lennon and I once hid from Andy in a closet at the Sherry-Netherland hotel. I wish I'd known him better. This fantastic new biography makes me feel that I do. It really reveals the man - and the genius - under that silver wig. — Elton John

"An excellent inside view on Andy’s life, personality and genius!" — Diane von Furstenberg

"Warhol lived one of the great lives of the 20th century, and he now has a biography worthy of that life...Even at 976 pages, the book rarely leaves you wanting less. It turns out this life, so often discussed in grandiose or mythic terms, is quite intricate, even beautiful, in extreme close-up.” — Los Angeles Times

"There have been several biographies and memoirs of Warhol, but Gopnik’s contribution may be the most comprehensive and clear-eyed. Warhol was an obsessive archivist and self-mythologist, but the author manages to wade through the evidence without being bogged down, and argues the case for Warhol as a genius of his own making.” — Apollo Magazine

"Knowing and getting a thumbs up from Andy Warhol as an up and coming artist in what would be his later years was a triumph and a thrill. Blake Gopnik's incisive, richly detailed bio puts you in Andy's inner circle and sanctum from beginning to end. It breaks down how, for decades, Andy strategically defined the pop culture zeitgeist as the world’s most renowned artist.”   — Fab 5 Freddy

Gopnik’s exhaustive but stylishly written and entertaining account is Warholian in the best sense—raptly engaged, colorful, open-minded, and slyly ironic. (“He had become his own Duchampian urinal, worth looking at only because the artist in him had said he was.”) Warhol fans and pop art enthusiasts alike will find this an endlessly engrossing portrait. — Publishers Weekly (starred review)

“An epic cradle-to-grave biography of the king of pop art...The author serves up fresh details about almost every aspect of Warhol's life in an immensely enjoyable book that blends snappy writing with careful exegeses of the artist's influences and techniques...A fascinating, major work that will spark endless debates.” — Kirkus Reviews (starred review)

"Highly readable...certainly for those fascinated with Warhol, but equally for those seeking an in-depth yet accessible introduction to the artist." — Library Journal