You Made Me a Mother (Hardcover) 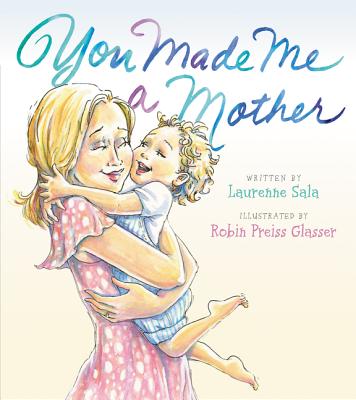 You Made Me a Mother (Hardcover)

A picture book for expectant mothers and already-mothers everywhere, perfect as a shower gift or for Mother's Day.

I felt you. You were a pea. Then a lemon. Then an eggplant...

In this beautiful celebration of motherhood, the universal message of unconditional love for a child shines through.

Laurenne Sala's heartwarming text, accompanied by New York Times bestselling artist Robin Preiss Glasser's charming illustrations, creates a sweet and intimate look at the powerful bond between mother and child from pregnancy to birth and beyond.

Laurenne Sala, author of You Made Me a Mother, is a storyteller, poet, and writer of everything from television commercials to jokes for the stage to the occasional viral video. When she isn’t writing her own essays and making people cry, Laurenne leads workshops that help others write their very personal stories. She loves blueberries, her cat named Cheddar, riding her bike along the beach, and being a mom. Laurenne lives with her husband and daughter in Los Angeles, where she likes to look at the ocean and wonder what is on the other side.

Robin Preiss Glasser actually wore tiaras and tutus when she danced with the Pennsylvania Ballet. Now she happily spends her days in jeans, drawing. She has illustrated many acclaimed picture books, including the bestselling Fancy Nancy series. She won the Children’s Choice Award for Best Illustrator of the Year for Fancy Nancy and the Mermaid Ballet. Robin and her family live in Southern California.

“Motherhood has rarely been summed up so succinctly or so well.”
— Kirkus Reviews (starred review)