A Kiss for Akaraka (Hardcover) 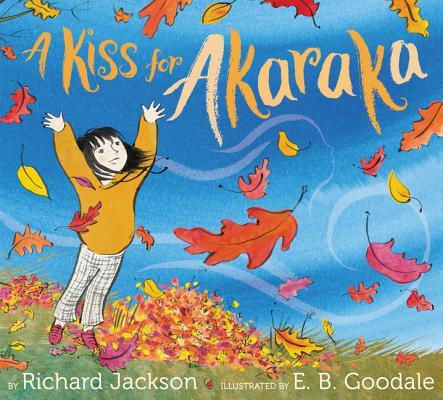 A Kiss for Akaraka (Hardcover)

A beautiful, lyrical picture book about a father, his daughter, and her imaginary friend raking leaves on a crisp fall day.

With gorgeous pictures by E. B. Goodale, the illustrator of the acclaimed Windows, this book about family, fatherhood, friendship, and imagination is perfect for story time and bedtime sharing all year round.

Critically acclaimed author Richard Jackson’s enchanting story about love, family, and the power of the imagination follows Lula and her daddy as they rake leaves together on a crisp autumn day. Can Daddy see Akaraka, Lula’s imaginary friend? Perhaps not, but he is willing to try, much to Lula’s delight.

A perfect book about parenthood and childhood to share together. The poetic text is a joy to read aloud and is enhanced by E. B. Goodale’s bright, enticing illustrations. Just right for fans of Kevin Henkes’s In the Middle of Fall and Julia Rawlinson’s Fletcher and the Falling Leaves.

Richard Jackson is an editor and author. He says: “Akaraka is a word in the Igbo language; a meaningful word to the Igbo-speaking people of southwestern Nigeria. It refers to marks on a person’s hand that spell out that person’s fate or destiny. At the time she  used it, in 1997, my granddaughter, Kelsey Albert, then three years old, couldn’t have realized this. She liked the sound, as do I for this story, in which my role is played by her father. I am now a writer, not a raker. I’ve published seven books for young people, among them This Beautiful Day, illustrated by Suzy Lee, and In Plain Sight, which was illustrated by Jerry Pinkney and awarded a Coretta Scott King Honor for illustration.”

E. B. Goodale is an illustrator, designer, and printmaker. She is also the illustrator of two acclaimed books for children: Windows, by Julia Denos, and A Most Unusual Day, by Sydra Mallery. The artist lives with her family in Salem, Massachusetts, where the autumn leaves are gold and red and occasionally purple. www.ebgoodale.com

“Readers will feel exhilarated, enclosed in Lula’s private secret…Spacious double-page spreads evoke the luxuriant pull of the imagination, where the charm of an imaginary friend can sweep you away, across borders.” — Kirkus Reviews (starred review)

“[A] tender, intimate family story, suitable for bedtime, when children both real and imaginary are tucked in and kissed good night.” — Booklist