How We Ricochet (Hardcover) 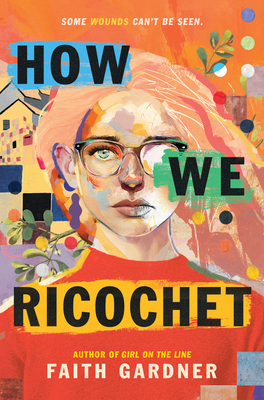 How We Ricochet (Hardcover)

For readers of This Is How It Ends and All the Bright Places, How We Ricochet takes an intimate and unflinching look into the devastating consequences of a mass shooting for one girl and her close-knit family, from Faith Gardner, acclaimed author of Girl on the Line.

It seems sometimes a charade that we continue celebrating in the face of relentless tragedy.

That was why Betty was at the mall with her mom and sister when the shooting started.

Afterward, nothing is the same.

There are no easy answers to be found, and Betty’s search for them leads her to Michael, the brother of the shooter. But this path only shows Betty one thing: that everything she thought she knew—about herself, about the world around her—can change in a heartbeat.

A moving, powerful journey of life after tragedy, How We Ricochet is a fearless and necessary story for our time that will resonate with readers everywhere.

Faith Gardneris the author of How We Ricochet, Girl on the Line, The Second Life of Ava Rivers, and Perdita. When she’s not writing, she plays in the band Plot 66.. She lives in the East Bay area and can be found online at www.faithgardner.com.

“Gardner (Girl on the Line) portrays complex, vulnerable characters navigating the aftermath of gun violence in this emotionally charged novel… Though the story is told from Betty’s point of view, her mother’s fury and her sister’s terror are as palpable as Betty’s burning desire to understand why the event happened and whether it was preventable.” — Publishers Weekly

“[How We Ricochet] highlights the different ways in which people respond to and recover from tragedy… This powerful novel is an important addition for teen collections.” — School Library Journal

Praise for Girl on the Line: “An achingly authentic depiction of cycling through depression and healing… the masterful handling gives the book bibliotherapeutic potential for readers struggling with the same issues or those who want to better understand the Journeys in their lives. An incredibly tough but worthwhile read.” — Kirkus Reviews (starred review)

“Journey is a sarcastic poet, and her voice reflects that, shifting seamlessly from resonant prose to humorous observation… There are no easy answers in Gardner’s (The Second Life of Ava Rivers) tough but deeply rewarding latest, but there is hope in its message that there is no singularly correct road to recovery—and that the journey is worthwhile.” — Publishers Weekly (starred review)

“[Journey is] a strong, vivid, and funny character, with a taste for dark and often evasive humor… she’s also here and hopeful, and that’s a hard-won prize that will hearten readers with their own battles.” — Bulletin of the Center for Children’s Books (starred review)

Praise for The Second Life of Ava Rivers:  "A beautiful, moving, and thoughtful story about how far we're willing to go for family."  — Kathleen Glasgow, New York Times bestselling author of Girl in Pieces

“This remarkable novel reproduces the personal and family trauma associated with the loss and recovery of a missing child . . . The Second Life of Ava Rivers is an enthralling tale.”  — Voice of Youth Advocates (VOYA) (starred review)

“Missing kid books aren’t rare, but Gardner brings a unique tenderness to this one; Vera is a deeply compelling narrator of this strange experience that no one, even her parents, can really understand the way she does…The book has its surprises, but it remains firmly focused on the human dynamics of creating family and individual identity in the face of tragedy.”— — Bulletin of the Center for Children’s Books (starred review)