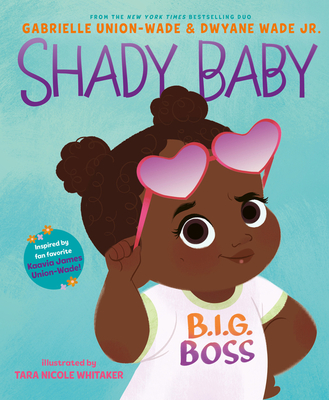 Based on their famous baby girl, Kaavia James:

After a long morning of being fabulous, Shady Baby heads to the park for a relaxing play session. But what does she find?! Some not-so-nice kids picking on others.

Shady flashes them a look—her famous side eye—and teaches them that it’s better to play nice. But when her feelings are hurt, will anyone stand (or crawl) by her side?

Find out in this upbeat picture book that teaches kids to speak their minds and stand up for what they believe in. Perfect for fans of The Boss Baby and Feminist Baby!

Gabrielle Union is an actress, executive producer, activist, best-selling author and most recently, a Time100 cover honoree. Union formed her production shingle “I’ll Have Another” in 2018 with the goal of telling stories that center marginalized communities with their specific point of views in an authentic manner. In August of 2020, she relaunched her haircare brand “Flawless by Gabrielle Union” for women with textured hair. The new and improved collection includes an array of options, affordably priced between $4 - $10, that empowers consumers to customize a regimen specific to their texture and style preferences. Prior to relaunching Flawless, Union learned of the disparities in the food space and joined Bitsy's as a cofounder with the goal of making healthy, allergen- friendly, school-safe snacks that are accessible and affordable for all families regardless of their socioeconomic or geographical status. Her first book, We’re Going To Need More Wine: Stories That Are Funny, Complicated and True, was released in 2017 and instantly became a New York Times best seller. Union serves as a leader and advocate for inclusion in the entertainment industry. She is also a champion of breast health and combating sexual violence.

Tara Nicole Whitaker’s education in art began early, from classes at Pratt in her youth to more formal training at RISD and California Institute of the Arts. She has designed for Dreamworks, Nickelodeon, Fox Animation, PBS, CBS, Cartoon Network, and Disney.

Dwyane Wade is a three-time NBA champion, businessman, TV analyst, producer, activist, and philanthropist. He played in the NBA from 2003 to 2019, primarily for the Miami Heat. Wade is the New York Times bestselling author of A Father First and co-author of Shady Baby. He is the father of five children: Zaire, Zaya, Xavier, Kaavia James, and his nephew Dahveon.

"Laid out in rollicking rhyme, the text sets a pace as energetic as its protagonist, keeping the pages turning and the rhythm bouncing for storytime read-alouds and independent readers alike. Serving looks and a little bit of shade with every reread." — Kirkus Reviews