On the Shortness of Life: Life Is Long if You Know How to Use It (Penguin Great Ideas) (Paperback) 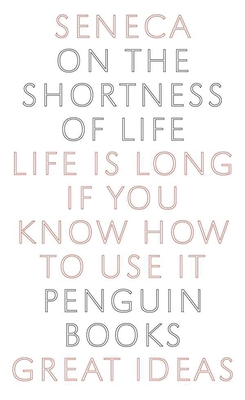 On the Shortness of Life: Life Is Long if You Know How to Use It (Penguin Great Ideas) (Paperback)


Usually Ships in 1-5 Days. Please note that sometimes a book is available on our website but not currently on the store shelves
Throughout history, some books have changed the world. They have transformed the way we see ourselves—and each other. They have inspired debate, dissent, war and revolution. They have enlightened, outraged, provoked and comforted. They have enriched lives—and destroyed them.

Now, Penguin brings you the works of the great thinkers, pioneers, radicals and visionaries whose ideas shook civilization, and helped make us who we are. Penguin's Great Ideas series features twelve groundbreaking works by some of history's most prodigious thinkers, and each volume is beautifully packaged with a unique type-drive design that highlights the bookmaker's art. Offering great literature in great packages at great prices, this series is ideal for those readers who want to explore and savor the Great Ideas that have shaped the world.

The Stoic writings of the philosopher Seneca, who lived from c. 5 BC to AD 65, offer powerful insights into the art of living, the importance of reason and morality, and continue to provide profound guidance to many through their eloquence, lucidity and timeless wisdom. This selection of Seneca's orks was taken from the Penguin Classics edition of Dialogues and Letters, translated by C.D.N. Costa, and includes the essays On the Shortness of Life, Consolation to Helvia, and On Tranquility of Mind.

Lucius Annaeus Seneca, statesman, philosopher, advocate and man of letters, was born at Cordoba in Spain around 4 BC. He rose to prominence in Rome, pursuing a career in the courts and political life, for which he had been trained, while also acquiring celebrity as an author of tragedies and essays. Falling foul of successive emperors (Caligula in AD 39 and Claudius in AD 41), he spent eight years in exile, allegedly for an affair with Caligula’s sister. Recalled in AD 49, he was made praetor and was appointed tutor to the boy who was to become, in AD 54, the emperor Nero. On Nero’s succession, Seneca acted for some eight years as an unofficial chief minister. The early part of this reign was remembered as a period of sound government, for which the main credit seems due to Seneca. His control over Nero declined as enemies turned the emperor against him with representations that his popularity made him a danger, or with accusations of immorality or excessive wealth. Retiring from public life he devoted his last three years to philosophy and writing, particularly the Letters to Lucilius. In AD 65 following the discovery of a plot against the emperor, in which he was thought to be implicated, he and many others were compelled by Nero to commit suicide. His fame as an essayist and dramatist lasted until two or three centuries ago, when he passed into literary oblivion, from which the twentieth century has seen a considerable recovery.