Before the Dawn: An Autobiography (Paperback) 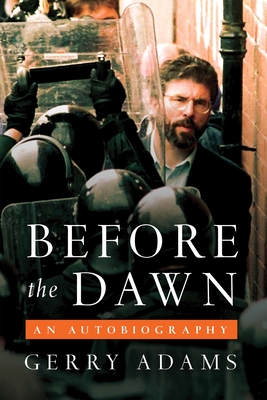 Before the Dawn: An Autobiography (Paperback)

In this fascinating memoir of his early life, Gerry Adams, the president of Sinn F in, describes the development of the modern "Troubles'' in the North of Ireland, his experiences during that period, including secret talks with the British government and imprisonment, his leadership role in Sinn F in, and the tragic hunger strike by imprisoned IRA prisoners in 1981. Born in 1948, Adams vividly recalls growing up in the working-class Ballymurphy district of West Belfast, where he became involved in the civil rights campaign in the late 1960s and was active in campaigns around issues of housing, unemployment, and civil rights. The unionist regime, which had been in interrupted power for 50 years, reacted violently to the protests, and the situation exploded into conflict. Adams recounts his growing radicalization, his work as a Sinn F in activist and leader, his relationship with the IRA, and the British use of secret courts to condemn republicans. Adams was a political prisoner. He was arrested many times and recounts his torture. He spent a total of five years in the notorious Long Kesh prison camp. First as an internee, held without charge, and then as a sentenced prisoner after he made two failed attempts to escape. Adams chronicles the dramatic hunger strikes of Bobby Sands, Francis Hughes, Raymond McCreesh, and others in 1980-81 which saw ten men die. Though he opposed the hunger strike Adams was instrumental in organizing the mass campaign in support of the hunger strikers which saw Bobby Sands elected as a member of the British Parliament and Ciaran Doherty and Kevin Agnew elected to the Irish Parliament. Before the Dawn is an engaging and revealing self-portrait that is essential reading for anyone wishing to understand modern Ireland. First published in 1996--at a time when politics in the North of Ireland was in crisis and the Good Friday Agreement was still two years away--this new edition contains a brand new introduction and epilogue written by the author, covering Adams's family, Brexit, and the peace process.