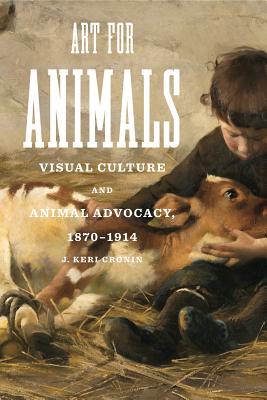 Animal rights activists today regularly use visual imagery in their efforts to shape the public's understanding of what it means to be "kind," "cruel," and "inhumane" toward animals. Art for Animals explores the early history of this form of advocacy through the images and the people who harnessed their power.

Following in the footsteps of earlier-formed organizations like the RSPCA and ASPCA, animal advocacy groups such as the Victoria Street Society for the Protection of Animals from Vivisection made significant use of visual art in literature and campaign materials. But, enabled by new and improved technologies and techniques, they took the imagery much further than their predecessors did, turning toward vivid, pointed, and at times graphic depictions of human-animal interactions. Keri Cronin explains why the activist community embraced this approach, details how the use of such tools played a critical role in educational and reform movements in the United States, Canada, and England, and traces their impact in public and private spaces. Far from being peripheral illustrations of points articulated in written texts or argued in impassioned speeches, these photographs, prints, paintings, exhibitions, "magic lantern" slides, and films were key components of animal advocacy at the time, both educating the general public and creating a sense of shared identity among the reformers.

Uniquely focused on imagery from the early days of the animal rights movement and filled with striking visuals, Art for Animals sheds new light on the history and development of modern animal advocacy.

J. Keri Cronin is Associate Professor of Visual Arts at Brock University. She is the author of Manufacturing National Park Nature: Photography, Ecology, and the Wilderness Industry of Jasper.