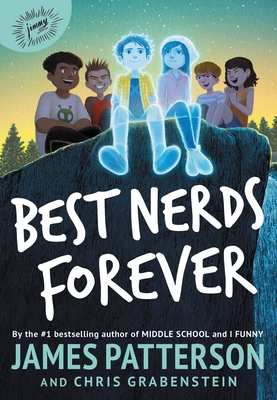 
On Our Shelves Now
Finn McAllister was a normal middle school nerd--now he’s a ghost with a big mystery to solve.

One minute, Finn was biking home from school, and the next, he was run off the road by a maniac in a big van. Now, he's a ghost. He can do lots of fun things, like try every ice cream flavor in the store, sneak up on people, and play as many video games as he wants. Finn even has a new ghost friend, Isabella, to show him the ropes. But he also has a lot of BIG questions, like: who wanted him dead? And can he stop the maniac from striking again?

Packed with hilarious moments, epic friendships, and fun art, Best Nerds Forever celebrates the nerd in each of us and the joy of living life to its fullest.
James Patterson has had more New York Times bestsellers than any other writer, ever, according to Guinness World Records. Since his first novel won the Edgar Award in 1977 James Patterson's books have sold more than 375 million copies. He is the author of the Alex Cross novels, the most popular detective series of the past twenty-five years, including Kiss the Girls and Along Came a Spider. He writes full-time and lives in Florida with his family.
Praise for Best Nerds Forever:

“Written with a balanced mix of comedy and insight . . . and the illustrations lend an added boost of humor. Readers will be rewarded through the very last page!”—Booklist

“Patterson and Grabenstein inject a lively underlying current and a sense of optimism as the new friends make the most of their spectral status and face the unknown future.”—Publishers Weekly