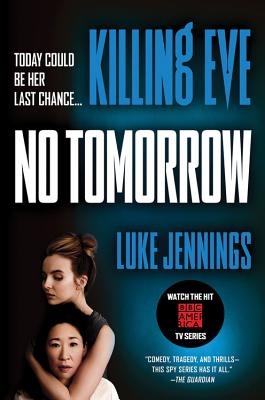 This is book number 2 in the Killing Eve series.

Eve and Villanelle plan for a high-stakes showdown in this sophisticated follow-up to the spy thriller that inspired the hit TV series Killing Eve.
"If you want us to remain silent -- if you want to retain your freedom, your job, and your reputation -- you need to tell us everything, and I mean everything. . ."
We last saw Eve and Villanelle in a spy vs. spy race around the world, crossing powerful criminal organizations and dangerous governments, each trying to come out on top. But they aren't finished yet.
In this sequel to Killing Eve: Codename Villanelle, former M16 operativeEve reveals a new side to her strengths, while coming ever closer to a confrontation with Villanelle, the evasive and skilled assassin.


Luke Jennings is the author of the memoir Blood Knots, short-listed for the Samuel Johnson and William Hill prizes, and of several novels, including the Booker Prize-nominated Atlantic. His previous book Codename Villanelle is the basis for BBC America's new TV series Killing Eve starring Sandra Oh and Jodie Comer.As a journalist he has written for The Observer, Vanity Fair, the New Yorker and Time.
Shortlisted for the CWA Ian Fleming Steel Dagger Award

"But it's all good, nasty fun for lovers of James Bond and Modesty Blaise--although Jennings is much more sexually explicit than Ian Fleming or Peter O'Donnell. This espionage romp keeps readers slightly off balance as it brilliantly walks the line between thriller and spoof--and readers will find the experience irresistible."—Shelf Awareness

"The obsessive relationship between the two women deepens. Nonstop action moves between London, Venice, Paris, Moscow, and the Swiss Alps, as the two women track each other, and amoral Villanelle continues her murderous ways. . . . Jennings provides plenty of spy craft and scenic and sensual atmosphere laced with betrayal in this adrenaline-fueled sequel to Killing Eve: Codename Villanelle, the book that spawned the BBC America series."—Booklist

"When Killing Eve crashed on our screens last year, it felt like a breath of fresh air: a feisty and funny entry in the recent revival of the staid, stuffy and overwhelmingly masculine spy genre. With a second season about to air in April and the coming release of the second book in Luke Jennings's Codename Villanelle series, it is clear Eve and Villanelle - the MI6 operative and the talented assassin she is tracking - will be with us a while longer."—Washington Post

"Like Ian Fleming, Jennings is at once tongue-in-cheek and serious. . . . His version of 007 is great fun."—Sunday Times (UK)

"A memorable protagonist . . . There is an extra sheen of glamor that makes Villanelle more a James Bond than a mere killer."—The Daily Mail (UK)