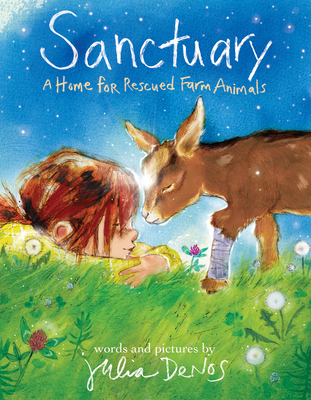 
Not Yet Published - Available for Pre-Order Now

Julia Denos lovingly illustrates a thoughtful, poetic text about protecting farm animals instead of exploiting them. Accessible to the youngest readers, this picture book gently celebrates compassion for all creatures. Perfect for fans of Becoming a Good Creature and Tiny, Perfect Things.

Where do you feel safe and seen?

When can you be yourself?

And why do we treat farm animals differently than our beloved pets?

These questions are explored in this gentle celebration of what it means to care for and respect creatures of all kinds. Poetic text and gorgeous, joyful art show us how we can protect animals by honoring and advocating for their lives.

Accessible to the youngest readers, Sanctuary invites us to open our hearts wide to create a more loving and more compassionate world—for all.

Julia Denos is the author of the multi-awarded picture book Windows, as well as Here and Now, both illustrated by E.B. Goodale, and is author/illustrator of Swatch: The Girl Who Loved Color, her author/illustrator debut, which was a 2016 ALA Notable selection. She is the illustrator of Margaret Cardillo's Just Being Audrey and Just Being Jackie, as well as I Had a Favorite Dress by Boni Ashburn. Inspired by her love of nature, words, and watercolor, she lives and works in coastal Massachusetts.
www.juliadenos.com
Instagram: @juliadenos

Julia Denos is the author-illustrator of Swatch: The Girl Who Loved Color and the illustrator of several children’s books, including Just Being Audrey by Margaret Cardillo, I Had a Favorite Dress by Boni Ashburn, Dotty by Erica S. Perl, Grandma’s Gloves by Cecil Castellucci, and Letters to Leo by Amy Hest. Julia currently lives in Boston. You can visit her online at www.juliadenos.com.

PRAISE FOR HERE AND NOW: "Readers will find themselves returning for a thoughtful moment again and again." — Kirkus Reviews (starred review)

PRAISE FOR HERE AND NOW: "Evocative.... robust.... playful.... a kid-centered take on mindfulness that should encourage budding philosophers, scientists, and questioners." — Bulletin of the Center for Children’s Books (starred review)

PRAISE FOR STARCROSSED: “Get lost in the stars in this gorgeous tale of friendship and astronomy.”  — Kirkus Reviews (starred review)

PRAISE FOR WINDOWS: Julia Denos’s prose, spare, evocative and spiced with an occasional, subtle rhyme, is very much in sync with the illustrator E. B. Goodale’s mixed-media art." — New York Times Book Review

PRAISE FOR WINDOWS: “A warmhearted tale of a child, a dog, and their peaceful, friendly, and inviting neighborhood.” — Kirkus Reviews (starred review)

PRAISE FOR WINDOWS: “Windows offers a…reframing of the everyday as something special, and beautiful, and worthy of attention; it makes everyday lives into a cozy art that we can all view and all make.” — Bulletin of the Center for Children’s Books (starred review)

PRAISE FOR WINDOWS: “This one stands out for its child protagonist’s independence, its matter-of-fact portrayal of a diverse city neighborhood, the emotion conveyed by the language, and the stunningly atmospheric art.” — Horn Book (starred review)