Buffalo for the Broken Heart: Restoring Life to a Black Hills Ranch (Paperback) 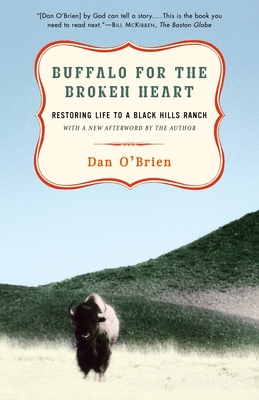 Buffalo for the Broken Heart: Restoring Life to a Black Hills Ranch (Paperback)


Usually Ships in 1-5 Days. Please note that sometimes a book is available on our website but not currently on the store shelves
For twenty years Dan O’Brien struggled to make ends meet on his cattle ranch in South Dakota. But when a neighbor invited him to lend a hand at the annual buffalo roundup, O’Brien was inspired to convert his own ranch, the Broken Heart, to buffalo. Starting with thirteen calves, “short-necked, golden balls of wool,” O’Brien embarked on a journey that returned buffalo to his land for the first time in more than a century and a half.

Buffalo for the Broken Heart is at once a tender account of the buffaloes’ first seasons on the ranch and an engaging lesson in wildlife ecology. Whether he’s describing the grazing pattern of the buffalo, the thrill of watching a falcon home in on its prey, or the comical spectacle of a buffalo bull wallowing in the mud, O’Brien combines a novelist’s eye for detail with a naturalist’s understanding to create an enriching, entertaining narrative.
Dan O'Brien, a writer and buffalo rancher, is the author of numerous books of fiction and nonfiction about the West. He has worked as an endangered-species biologist and an English teacher. He lives in Whitewood, South Dakota.
“[Dan O’Brien] by God can tell a story....This is the book you need to read next.”
—Bill McKibben, The Boston Globe

“A deeply felt story of life on the Great Plains that strays through time and history, touching again and again on the two great themes of the place—rapture and ruin—and finds its way finally to Dan O’Brien’s patient heart.”
—Pete Dexter

“This is a bold, brave, and beautifully written book that should be required reading for every cattleman and beef eater in America.”
—Outside

“Dan O’Brien’s memoir is a poignant portrayal of our link to the land, and to each other. As personal as a confession and as sweeping as the South Dakota sky, Buffalo for the Broken Heart will leave you entertained, moved, and changed.”
—Tom Daschle, majority leader, United States Senate