The Perfect Storm: A True Story of Men Against the Sea (Paperback) 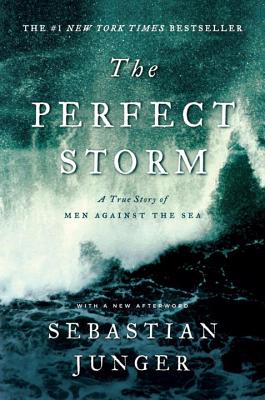 The Perfect Storm: A True Story of Men Against the Sea (Paperback)

"There is nothing imaginary about Junger's book; it is all terrifyingly, awesomely real." —Los Angeles Times

It was the storm of the century, boasting waves over one hundred feet high—a tempest created by so rare a combination of factors that meteorologists deemed it "the perfect storm." In a book that has become a classic, Sebastian Junger explores the history of the fishing industry, the science of storms, and the candid accounts of the people whose lives the storm touched. The Perfect Storm is a real-life thriller that makes us feel like we've been caught, helpless, in the grip of a force of nature beyond our understanding or control.

Sebastian Junger is the #1 New York Times bestselling author of The Perfect Storm, A Death in Belmont, Fire, War, Tribe, and Freedom. As an award-winning journalist, a contributing editor to Vanity Fair, and a special correspondent at ABC News, he has covered major international news stories around the world, and has received both a National Magazine Award and a Peabody Award. He lives in New York City and Cape Cod.
Thrilling…even if you have never been to sea, Junger's account will put the frighteners on you.
— New York Times Book Review

Every boater is drawn to storm-at-sea stories, and this one beats them all.
— Philadelphia Inquirer

Rich, compassionate characterization, as well as taut, suspenseful prose. A tale that doesn't skimp on facts, yet keeps you turning pages from beginning to end.
— Seattle Times

Riveting…The natural upheaval holds center stage and acts as a character, but the story converges upon human beings—in this case, the six-man crew of the doomed Gloucester swordfishing boat Andrea Gail.

The pages of this book crunch with salt.
— Boating

A terrifying, edifying read…Readers…are first seduced into caring for the book’s doomed characters, then compelled to watch them carried into the jaws of a meteorological hell. Junger’s compassionate, intelligent voice instructs us effortlessly on the sea life of the sword-fisherman, the physics of a sinking steel ship, and the details of death by drowning.
— Dava Sobel

One reads with the most intense concern, anxiety and concentration; and if one knows anything at all about the sea one feels the absolutely enormous strength of the hurricane winds and the incredibly towering mass of the hundred-foot waves.
— Patrick O'Brian