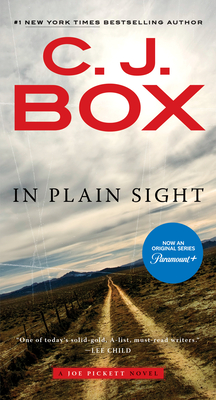 This is book number 6 in the A Joe Pickett Novel series.

Wyoming game warden Joe Pickett's hunt for a missing woman forces him to confront his own past in this gripping novel in the #1 New York Times bestselling series.

Ranch owner and matriarch Opal Scarlett has vanished under suspicious circumstances during a bitter struggle between her sons for control of her million-dollar empire. Joe Pickett is convinced one of them must have done her in. But when he becomes the victim of a series of wicked and increasingly violent pranks, Joe wonders if what's happening has less to do with Opal's disappearance than with the darkest chapters of his own past. Whoever is after him has a vicious debt to collect, and wants Joe to pay...and pay dearly.
C. J. Box is the #1 New York Times bestselling author of the Joe Pickett series, five stand-alone novels, and the story collection Shots Fired. He has won the Edgar, Anthony, Macavity, Gumshoe, and two Barry awards, as well as the French Prix Calibre .38 and a French Elle magazine literary award. His books have been translated into twenty-seven languages. He and his wife Laurie split their time between their home and ranch in Wyoming.
Praise for In Plain Sight

“[G]et drawn in just by reading the opening page of In Plain Sight. Just be warned, you'll want to keep the lights burning.”—Billings Gazette (MT)

More Praise for the C. J. Box and the Joe Pickett novels

“Picking up a new C. J. Box thriller is like spending quality time with family you love and have missed...It’s a rare thriller series that has characters grow and change. An exciting reading experience for both loyal fans as well as newcomers.”—Associated Press

“Box knows what readers expect and delivers it with a flourish.”—Cleveland Plain Dealer

“Will keep you on the edge of your seat.”—The Philadelphia Enquirer