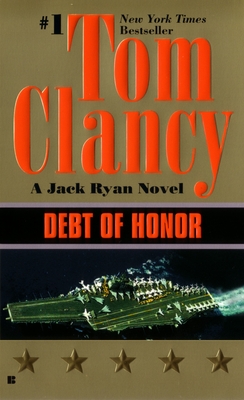 This is book number 6 in the A Jack Ryan Novel series.

“A harrowing tale…Clancy keeps you riveted with political intrigue and military maneuvering [and] sends you rushing headlong to the book’s stunning conclusion.”—USA Today

Bestselling author Tom Clancy takes a bold, incisive look at what our nation’s leaders are calling “the new world order.” The time and place: a world at peace, where yesterday’s enemies are tomorrow’s allies. The players: Jack Ryan as the new U.S. President’s National Security Advisor, and his CIA colleagues, John Clark and Domingo Chavez. The crisis: a shocking chain of events in which the wages of peace are as fully complex—and devastating—as those of war.

“[Debt of Honor] traces the financial, political, military, and personal machinations that drive America into the next major global war…A SHOCKER.”—Entertainment Weekly
A little more than thirty years ago Tom Clancy was a Maryland insurance broker with a passion for naval history. Years before, he had been an English major at Baltimore’s Loyola College and had always dreamed of writing a novel. His first effort, The Hunt for Red October—the first of the phenomenally successful Jack Ryan novels—sold briskly as a result of rave reviews, then catapulted onto the New York Times bestseller list after President Reagan pronounced it “the perfect yarn.” From that day forward, Clancy established himself as an undisputed master at blending exceptional realism and authenticity, intricate plotting, and razor-sharp suspense. He passed away in October 2013.
Praise for Debt of Honor

“He constantly taps the current world situation for its imminent dangers and spins them into an engrossing tale.”—The New York Times Book Review

“No one can equal his talent for making military electronics and engineering intelligible and exciting...He remains the best!”—Houston Chronicle