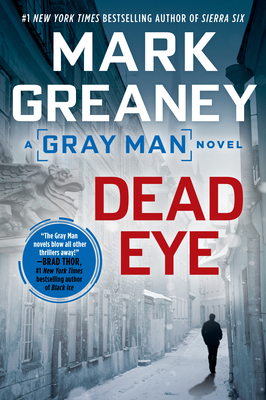 This is book number 4 in the Gray Man series.

Ex-CIA master assassin Court Gentry gets hit with a blast from the past in the fourth Gray Man novel from #1 New York Times bestselling author Mark Greaney.

Court Gentry has always prided himself on his ability to disappear at will, to fly below the radar and exist in the shadows—to survive as the near-mythical Gray Man. But when he takes revenge upon a former employer who betrayed him, he exposes himself to something he’s never had to face before: a killer who is just like him.

Code-named Dead Eye, Russell Whitlock is a graduate of the same ultra-secret Autonomous Asset Program that trained and once controlled Gentry. But now, Whitlock is a free agent who has been directed to terminate his fellow student of death. He knows how his target thinks, how he moves, and how he kills. And he knows the best way to do the job is to make Gentry run for his life—right up until the moment Dead Eye finally ends it...
Mark Greaney has a degree in international relations and political science. In his research for the Gray Man novels, including Agent in Place, Gunmetal Gray, Back Blast, Dead Eye, Ballistic, On Target, and The Gray Man, he traveled to more than fifteen countries and trained alongside military and law enforcement in the use of firearms, battlefield medicine, and close-range combative tactics. He is also the author of the New York Times bestsellers Tom Clancy Support and Defend, Tom Clancy Full Force and Effect, Tom Clancy Commander in Chief, and Tom Clancy True Faith and Allegiance. With Tom Clancy, he coauthored Locked On, Threat Vector, and Command Authority.
“I LOVE THE GRAY MAN.”—#1 New York Times bestselling author Lee Child

“The various moves of each of the skilled and ruthless principals play out against a constantly shifting background of changing goals and allegiances. Fans of superhuman antiheroes will hope the Gray Man survives to fight another day.”—Publishers Weekly

“Political intrigue at its finest...Dead Eye twists and turns with each new revelation as Mark Greaney takes the reader on one heck of a wild ride!”—Fresh Fiction

“Writing as smooth as stainless steel and a hero as mean as razor wire.”—New York Times bestselling author David Stone

“The story is so propulsive, the murders so explosive, that flipping the pages feels like playing the ultimate video game.”—The New York Times

“A high-octane thriller that doesn’t pause for more than a second for all of its 464 pages.”—Chicago Sun-Times