The Cardinal of the Kremlin (A Jack Ryan Novel #3) (Paperback) 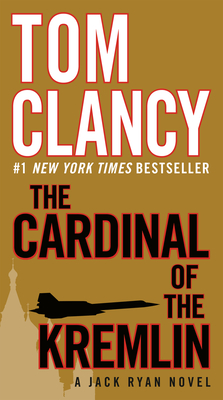 The Cardinal of the Kremlin (A Jack Ryan Novel #3) (Paperback)

This is book number 3 in the A Jack Ryan Novel series.

In this electrifying #1 New York Times bestselling thriller from Tom Clancy, a silent war between the USA and Russia will decide the fate of the world—and Jack Ryan is behind enemy lines.

Two men possess vital data on Russia’s Star Wars missile defense system. One of them is CARDINAL—America's highest agent in the Kremlin—and he's about to be terminated by the KGB. The other is the one American who can save CARDINAL and lead the world to the brink of peace...or war.
A little more than thirty years ago Tom Clancy was a Maryland insurance broker with a passion for naval history. Years before, he had been an English major at Baltimore’s Loyola College and had always dreamed of writing a novel. His first effort, The Hunt for Red October—the first of the phenomenally successful Jack Ryan novels—sold briskly as a result of rave reviews, then catapulted onto the New York Times bestseller list after President Reagan pronounced it “the perfect yarn.” From that day forward, Clancy established himself as an undisputed master at blending exceptional realism and authenticity, intricate plotting, and razor-sharp suspense. He passed away in October 2013.
Praise for The Cardinal of the Kremlin

“He constantly taps the current world situation for its imminent dangers and spins them into an engrossing tale.”—The New York Times Book Review

“No one can equal his talent for making military electronics and engineering intelligible and exciting...He remains the best!”—Houston Chronicle