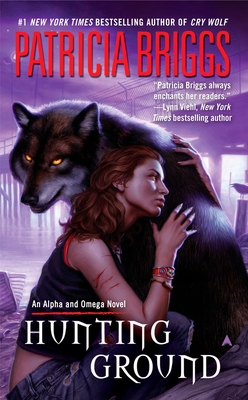 This is book number 2 in the Alpha and Omega series.

Anne Latham didn't know how complicated life could be until she became a werewolf and was mated to Charles Cornick, the son—and enforcer—of the leader of the North American werewolves. She didn't know how dangerous it could be either...

Anna and Charles have just been enlisted to attend a summit to present Bran's controversial proposition: that the wolves should finally reveal themselves to humans. But the most feared Alpha in Europe is dead set against the plan—and it seems like someone else might be, too. When Anna is attacked by vampires using pack magic, the kind of power only werewolves should be able to draw on, Charles and Anna must combine their talents to hunt down whoever is behind it all—or risk losing everything...
Patricia Briggs is the #1 New York Times bestselling author of the Mercy Thompson urban fantasy series and the Alpha and Omega novels.
“Magnificent!...There are scenes in Hunting Ground that will melt your heart and make you pant and drool. If you’re looking for a fantasy/paranormal series that will knock your socks off with nonstop action, character development, and romance, then the Alpha and Omega series is it...Patricia Briggs is pure bliss!”—The Romance Readers Connection

More Praise for the Alpha and Omega Novels

“Briggs has created such a detailed and well thought out world that I am helpless to resist.”—Fiction Vixen

“[Briggs] spins tales of werewolves, coyote shifters and magic and, my, does she do it well...If you like action, violence, romance and, of course, werewolves, then I urge you to pick up this series.”—USATODAY.com