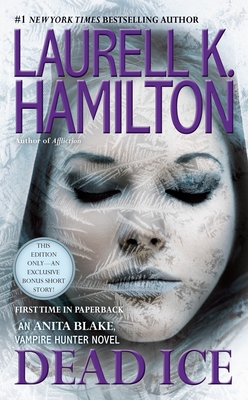 This is book number 24 in the Anita Blake, Vampire Hunter series.

Becoming the fiancée of master vampire Jean-Claude is wreaking havoc with Anita Blake’s reputation as a hardass—to some extent. Luckily, in professional circles, she’s still the go-to expert for zombie issues. And right now, the FBI is having one hell of a zombie issue.

It’s the sort of case that can leave a mark on a person. And Anita’s own soul may not survive unscathed...
Laurell K. Hamilton is a full-time writer and the #1 New York Times bestselling author of the Anita Blake, Vampire Hunter series and the Merry Gentry series. She lives in a suburb of St. Louis with her family.
Praise for Dead Ice

“If you’re looking for a sex-positive, kick-ass female protagonist in a novel filled with sexy supernatural monsters, then Dead Ice may well be your thing...Laurell K. Hamilton continues to be the master of this most unusual of genres.”—Starburst

“An absorbing plot and a tantalizing mystery.”—St. Louis Post-Dispatch

“Her descriptive prose is gritty and raw, with a mosaic of humor and horror to tell this complex, well-detailed story.”—Library Journal