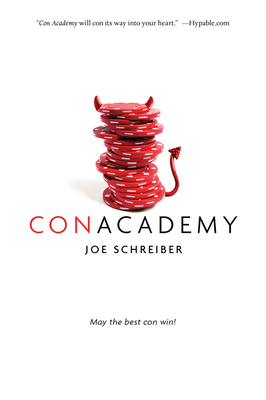 
Usually Ships in 1-5 Days. Please note that sometimes a book is available on our website but not currently on the store shelves
It's his senior year and Will Shea has conned his way into one of the country's most elite prep schools. But he soon runs into Andrea, a fellow con-artist. With the school not big enough for the both of them, they make a bet that whoever can con Brandt Rush, the richest, most privileged student in the school out of $50K, gets to stay at the school. Will starts setting up his con (an online poker scam) with his uncle who's one of the best grifters in the business, but also with the unwanted help of his father.. The plot thickens as Will starts falling for fellow student Gatsby, and some of Will's lies start to catch up with him.

In this twisty tale of scams, secrets, lies and deception, it hard to figure out who's conning who!

JOE SCHREIBER is the New York Times bestselling author of adult novels Death Troopers, Chasing the Dead, and Eat the Dark. His other novels for young people include, the critically acclaimed Au Revoir, Crazy European Chick, Perry's Killer Playlist, and Lenny Cyrus, School Virus. He lives in Pennsylvania with his wife and children.

"This is an ideal teen quick pick—short and clever, with just a tinge of bitterness in Will’s voice to sell his character—and pure catnip for caper fans." —Bulletin   "Quick and entertaining, this comic romp fulfills its promising setup." —Kirkus   "This novel successfully mirrors such films as Ocean’s Eleven as well as Mission Impossible and makes the text accessible to a younger audience...humorous and intriguing." —School Library Journal   "Schreiber's plot is pure fun, deliciously convoluted and full of surprises." —Horn Book Magazine   "A fast-paced, humor-laced, action packed romp with great appeal for fans of mysteries, heists, underdogs, and Robin Hood-style justice." —Booklist
— No Source