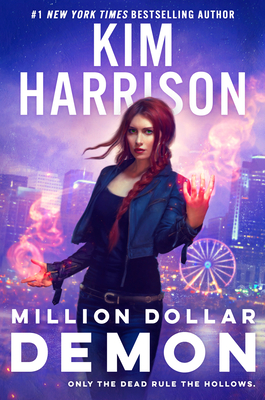 This is book number 15 in the Hollows series.

To save the city, Rachel Morgan will need to show some teeth in the next Hollows novel from #1 New York Times bestselling author Kim Harrison.

The new master vampire of Cincinnati has arrived . . . and she wants Rachel Morgan out. No matter where Rachel goes, Constance is there--threatening Rachel's allies, causing city-wide chaos, and, to add insult to injury, even forcing Rachel out of her current quarters. Ever since Rachel found a way to save the souls of vampires, the old undead's longtime ascendancy has been broken. Now Constance sees eliminating Rachel as the key to consolidating her own power.

Rachel has no desire to be enthralled or killed--and she's terrified of what may become of the city if Constance forces a return to the ancient ways. But even a witch-born demon can't stand against the old undead--at least, not alone. And if Rachel refuses to claim the role of Cincinnati's master demon, the city will tear itself apart, taking her and all those who stand beside her with it.
Kim Harrison is the author of the #1 New York Times bestselling Hollows series, including American Demon, The Witch with No Name, and The Undead Pool. She has published more than two dozen books—from young adult to speculative thriller—has written short fiction for various anthologies, and has scripted two original graphic novels set in the Hollows universe. She has also published traditional fantasy under the name Dawn Cook. Kim was born and raised in Michigan and between other projects is currently working on a new Hollows book.
Praise for Kim Harrison and the Hollows series:

"The world of the Hollows is fast-moving, funny, harrowing, and scary, and--the greatest compliment to a fantasy--absolutely real."--Diana Gabaldon, New York Times bestselling author of the Outlander series