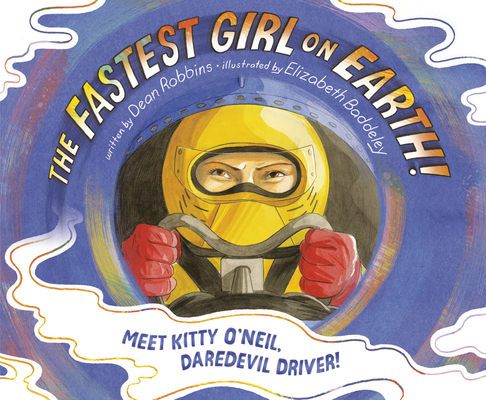 
On Our Shelves Now
Gear up for this high-powered picture book biography about Kitty O'Neil, the stuntwoman and racecar driver who broke the women's land speed record!

Kitty O'Neil was a force to be reckoned with. She became deaf as a child, and grew up loving sports and action. Kitty jumped, ran, raced, and swam, all while learning to read lips and communicating through sign language. Eventually, Kitty took a job as a stuntwoman, doing the most dangerous job on set and even filming stunts for films like Wonder Woman!

Still, Kitty wanted more thrills. She became a racecar driver and sought to do what no woman had done before. She chose the aptly named Motivator and trained like a true champion. In 1976, Kitty and the Motivator broke the land speed record, racing at over 600 miles per hour! Kitty was a hero to fans everywhere, and proved that she was truly unstoppable.
Dean Robbins is a journalist and children's book author. His previous books include, Two Friends; Susan B. Anthony and Frederick Douglass, illustrated by Sean Qualls and Selina Alko, and Miss Paul and the President, illustrated by Nancy Zhang. He lives in Madison, Wisconsin, with his family. You can visit him at deanrobbins.net.

Elizabeth Baddeley teaches design and is an illustrator whose previous work includes A Woman in the House (and Senate) by Ilene Cooper, Women Who Broke the Rules: Mary Todd Lincoln by Kathleen Krull, and I Dissent: Ruth Bader Ginsburg Makes Her Mark by Debbie Levy. She lives in Kansas City, Missouri. See more of her work at ebaddeley.com. Follow her on Twitter at @BizBeth.
"This thrilling biography provides excellent representation of the deaf community as well as of a woman in sports." --School Library Journal, starred review