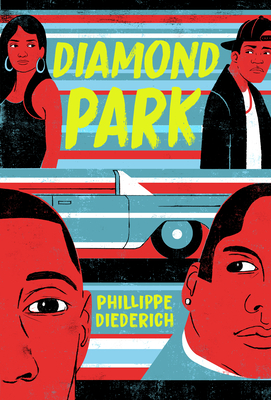 
Usually Ships in 1-5 Days. Please note that sometimes a book is available on our website but not currently on the store shelves
A fast-paced YA novel about four Mexican-American teenagers from Houston, a '59 Chevy Impala, and a murder that changes their lives forever.

Flaco isn’t the kind of kid who gets in trouble. He doesn’t want to give his mom or his aunt Ana Flor any grief—they’ve had enough since his cousin Carlos died serving in Afghanistan. But he finds a whole lot more trouble than he bargained for when he and his friends Tiny, Magaña, and Susi ride the bus from their Houston neighborhood to Diamond Park to buy a used car. And not just any car—a 1959 Impala convertible, a dream car. The transaction gets complicated fast, and Susi ends up with a knife in her hands, covered in blood. When Tiny has to disappear to avoid ICE, Flaco and Magaña head south in the Impala to set things right. In a wildly impetuous move, the two boys cross into Mexico hunting for a trafficker named Anaconda, the man they believe is the real killer, to clear Susi’s name. In a breathtaking, seat-of-your-pants adventure they manage to kidnap him but in the process they discover how little they ever actually understood about what really happened in Diamond Park.
Phillippe Diederich is a freelance photographer and writer. He is the son of Haitian exiles, and he grew up in Mexico City. He is a recipient of the PEN/Phyllis Naylor Working Writer Fellowship and the author of two previous novels, including the acclaimed novel Playing for the Devil's Fire, a YALSA Best Fiction for Young Adults pick. He lives in Florida.
★“Tense, raw and gorgeously written, Diamond Park will resonate with any reader who, in a world filled with ample reason for pessimism, strives instead for optimism.”—Book Page, starred review

★ "Packs a punch while managing to wrest tough situations into the realm of hope."—Booklist, starred review

★"An important title displaying the complexities of Latinx culture and of finding a sense of self set against the backdrop of trying to catch a murderer, this story will keep readers on the edge with danger lurking behind every corner."—SLJ, starred review
"Phillippe Diederich's Diamond Park is a powerful novel about teenagers forced to grow up too soon, kids dealing with adult problems. Gripping and expertly paced, this literary thriller is about so many things—the implicit and explicit violence of the U.S.-Mexico border, the nuances of the Mexican-American experience, racial injustice. And most importantly family and friendship."—Jaquira Díaz, author of Ordinary Girls