In Charm's Way (The Witches of Thistle Grove #4) (Paperback) 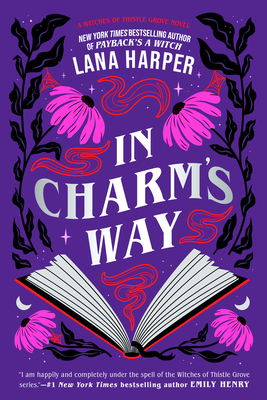 In Charm's Way (The Witches of Thistle Grove #4) (Paperback)

This is book number 4 in the The Witches of Thistle Grove series.

A witch struggling to regain what she has lost casts a forbidden spell—only to discover much more than she expected, in this enchanting new rom-com by New York Times bestselling author Lana Harper.

Six months after having been hit by a power surge that nearly obliterated her memory, Delilah Harlow is still picking up the pieces. Her once diamond-sharp mind has become shaky and unreliable, and bristly, self-sufficient Delilah is forced to rely on friends, family, and her raven familiar for help. In an effort to reclaim her wits and former independence, she casts a dangerous blood spell meant to harness power with healing capacities.

While the spell does restore clarity, it also unexpectedly turns Delilah into an irresistible beacon for the kind of malevolent supernatural creatures that have never before ventured into Thistle Grove. One night—just as things are about to go terribly sideways with a rogue succubus—a mysterious stranger appears in the nick of time to save Delilah’s soul.

Gorgeous, sultry, and as dangerous as the knives she carries, Catriona Quinn is a hunter of monsters—and half-human, half-fae herself, she is the kind of sly and morally gray creature Delilah would normally find horrifying. Though Delilah balks at the idea of a partnership, she has no choice but to roll the dice on their collaboration. As the two delve deeper into the power that underlies Thistle Grove, they uncover not only the town’s hidden history but also a risky attraction that could upend Delilah’s entire life.
Lana Harper is the New York Times bestselling author of the Witches of Thistle Grove series. Writing as Lana Popović, she has also written four YA novels about modern-day witches and historical murderesses. Born in Serbia, Lana grew up in Hungary, Romania, and Bulgaria before moving to the US, where she studied psychology and literature at Yale University, law at Boston University, and publishing at Emerson College. She lives in Chicago, where she spends most of her time plotting witchy stories and equally witchy tattoos.