Beyond Good & Evil: Prelude to a Philosophy of the Future (Paperback) 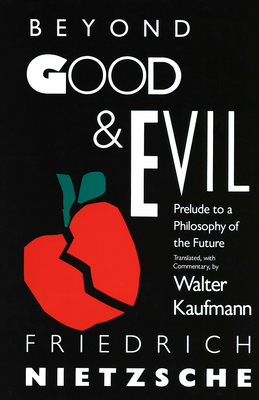 Beyond Good & Evil: Prelude to a Philosophy of the Future (Paperback)


Usually Ships in 1-5 Days. Please note that sometimes a book is available on our website but not currently on the store shelves
One of the most remarkable and influential books of the nineteenth century—Nietzsche's attempt to sum up his philosophy.

In nine parts the book is designed to give the reader a comprehensive idea of Nietzsche's thought and style:  they span "The Prejudices of Philsophers," "The Free Spirit," religion, morals, scholarship, "Our Virtues," "Peoples and Fatherlands," and "What Is Noble," as well as epigrams and a concluding poem.
This translation by Walter Kaufmann has become the standard one, for accuracy and fidelity to the eccentricities and grace of the style of the original.  The translation is based on the only edition Nietzsche himself published, and all variant reading in later editions.  This volume offers an inclusive index of subjects and persons, as well as a running footnote commentary on the text.
FRIEDRICH NIETZSCHE was born in Prussia in 1844. After the death of his father, a Lutheran minister, Nietzsche was raised from the age of five by his mother in a household of women. In 1869 he was appointed Professor of Classical Philology at the University of Basel, where he taught until 1879 when poor health forced him to retire. He never recovered from a nervous breakdown in 1889 and died eleven years later. Known for saying that “god is dead,” Nietzsche propounded his metaphysical construct of the superiority of the disciplined individual (superman) living in the present over traditional values derived from Christianity and its emphasis on heavenly rewards. His ideas were appropriated by the Fascists, who turned his theories into social realities that he had never intended.

WALTER KAUFMANN was a philosopher and poet, as well as a renowned translator of Friedrich Nietzsche. His books include Nietzsche: Philosopher, Psychologist, Antichrist, From Shakespeare to Existentialism, and Existentialism: From Dostoevsky to Sartre. He was a Professor of Philosophy at Princeton University, where he taught after receiving his Ph.D. from Harvard in 1947 until his death in 1980. He held visiting appointments at many American and foreign universities, including Columbia, Cornell, Heidelberg, Jerusalem, and the Australian National University; and his books have been translated into Dutch, German, Italian, Japanese, and Spanish.