The Denial of Death (Paperback) 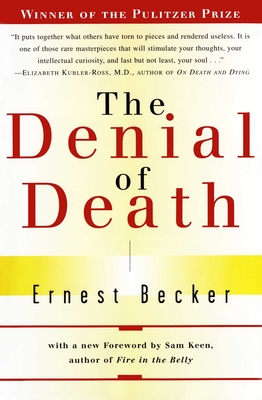 The Denial of Death (Paperback)


Usually Ships in 1-5 Days. Please note that sometimes a book is available on our website but not currently on the store shelves
Winner of the Pulitzer prize in 1974 and the culmination of a life's work, The Denial of Death is Ernest Becker's brilliant and impassioned answer to the "why" of human existence. In bold contrast to the predominant Freudian school of thought, Becker tackles the problem of the vital lie -- man's refusal to acknowledge his own mortality. In doing so, he sheds new light on the nature of humanity and issues a call to life and its living that still resonates more than twenty years after its writing.
Ernest Beckner (1924–1974) won the Pulitzer Prize for General Nonfiction for The Denial of Death. A distinguished social theorist and a popular teacher of anthropology, sociology, and social psychology, he was also the author of Revolution in Psychiatry, Angel in Armor, and The Structure of Evil.
Elizabeth Kubler-Ross, M.D. Author of On Death And Dying It puts together what others have torn to pieces and rendered useless. It is one of those rare masterpieces that will stimulate your thoughts, your intellectual curiosity, and last but not least, your soul...

Albuquerque Journal Book Review ...to read it is to know the delight inherent in the unfolding of a mind grasping at new possibilities and forming a new synthesis. The Denial of Death is a great book -- one of the few great books of the 20th or any other century.

The Chicago Sun-Times It is hard to overestimate the importance of this book; Becker succeeds brilliantly in what he sets out to do, and the effort was necessary.