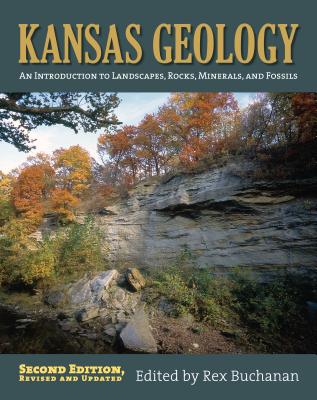 
Special Order - Email for Availability
What are the state's outstanding landforms, and where are they found? How were Kansas rocks and minerals formed? Why is Kansas world famous among fossil collectors? How does one "read the rocks" to find evidence of ancient oceans, earthquakes, and even volcanoes in Kansas? Learn all that and much more in this new edition of a classic work designed for both general readers and geologists. Like the original edition, first published in 1984, the revised edition of Kansas Geology is heavily illustrated with photographs and line drawings, many of them in full color, plus maps and figures. The introduction sketches Kansas geologic history; discusses how Kansas fits into the geology of the North American continent; explores the concepts of geologic time, labeling, and periods; and describes the natural forces of deposition and erosion. The section on landscapes focuses on the geologic and natural features of Kansas--those that can be seen on the surface--by describing the characteristics of its eleven physiographic regions. The chapters on rocks and minerals describe what they are composed of, how they were formed, and where they are found. This section includes discussions of sedimentary rocks--limestones, sandstones, shales, chalk--as well as mineral fuels, minerals, and sedimentary structures. Another chapter reviews Kansas fossil history, describes common fossils and their locations, and explains why Kansas is world famous among fossil collectors. The book also includes a special guide to noteworthy geological formations along Interstate 70 that pinpoints exact spots where interesting landform features can be observed. The new edition has been revised throughout and includes a new and updated version of the guide to the geology along Interstate 70; new photographs that reflect changes in the landscape since the book was originally published; and the latest terminology for the names of geologic periods and individual rock layers. "Would you believe that sharks once swam in the middle of the North American continent? Or that flying reptiles with a wingspan of 20 feet existed, not only in the movies, but actually? These are just two fossils represented among the many illustrations in this interesting and informative book."--Coffeyville Journal Published for the Kansas Geological Survey