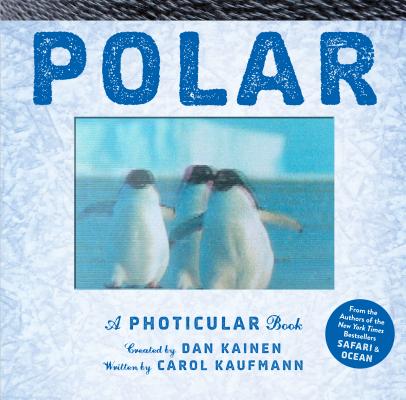 Take a stunning journey to the ends of the earth through the colorful, fluid motion of Photicular® technology. A phenomenon first seen in the bestsellers Safari and Ocean, Photicular technology uses sliding lenses and video imagery to display realistic living motion in the pages of a book. It’s like a movie in your hand.

Penguins waddle in their irresistibly happy way. A walrus lumbers across the snowy landscape. There’s a polar bear with her lively cubs. A beluga whale, breaching. A team of sled dogs sprinting directly at the viewer. And the miracle of the Northern Lights, shimmering like a silk rainbow through the star-filled night.

National Geographic writer Carol Kaufmann brings the reader along on a voyage to the North and South Poles, and writes a lively and informative essay for each image, including vital statistics for each animal, such as their size, range, habitat, and more.

Dan Kainen is an artist, designer, and inventor living in New York City. He is the creator of the bestselling Photicular books Safari, Ocean,Polar, Jungle, and Wild. His website is DanKainen.com.

While working with some of the pioneers of holography, Dan created a special spotlight that was used by Soho’s Museum of Holography to light holograms. The related field of holography led to Dan’s interest in lenticular art and, in turn, after nearly a decade of research and experimentation, to the creation of his “Motion Viewer,” his third patent in that field and the inspiration for Safari and the other Photicular books.

Carol Kaufmann is the author of 97 Ways to Make a Cat Like You and co-author of the bestselling Photicular books Safari, Ocean, and Polar (Oct. 2015). A freelance writer and editor, her work for National Geographic and other publications has taken her to all corners of the globe, from the Pacific Ocean’s floor to the top the Atlas Mountains. In addition to National Geographic, her writing has appeared in the New York Times’ Draft column, Reader’s Digest, where she was the National Affairs Reporter, The Washington Post, George, and in the anthology A Woman’s Europe. She is also the author of the ebook, MamaTricks. She lives in Alexandria, Virginia.