To Disguise the Truth (Paperback) 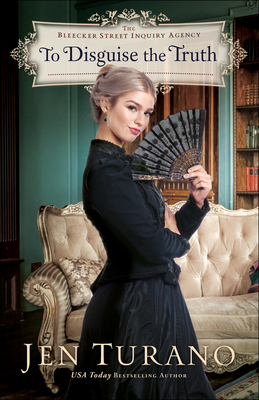 To Disguise the Truth (Paperback)


Usually Ships in 1-5 Days. Please note that sometimes a book is available on our website but not currently on the store shelves
When Arthur Livingston arrives out of the blue at the Bleecker Street Inquiry Agency, anxious to hire the agency to seek out a missing heiress, Eunice Holbrooke realizes her past has finally caught up with her.

Having fled from the scene of her grandfather's murder seven years before, Eunice is a lady with secrets--the most important that she is the missing heiress Arthur is seeking. She has no intention of allowing him to learn she's been disguising herself, especially when she has reason to believe Arthur could hold her responsible for her grandfather's death.

In order to avoid Arthur and conceal her real identity, Eunice takes on another case that requires her to go deep undercover. With secrets from the past--and Arthur--appearing wherever she looks, she wonders how she will ever uncover the truth behind her grandfather's murder. Will what she discovers set Eunice free or place her in peril's way?
Named one of the funniest voices in inspirational romance by Booklist, Jen Turano is a USA Today bestselling author known for penning quirky historical romances set in the Gilded Age. Her books have earned Publishers Weekly and Booklist starred reviews, top picks from RT Book Reviews, and praise from Library Journal. She's been a finalist twice for the RT Reviewers' Choice Awards and had two of her books listed in the top 100 romances of the past decade from Booklist. She and her family live outside of Denver, Colorado. Readers can find her on Facebook, Instagram, and Twitter, and at jenturano.com.