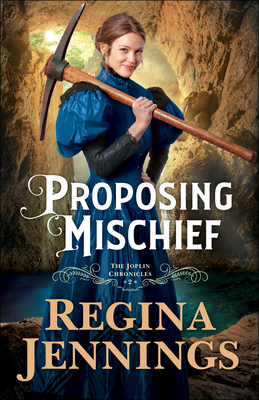 
Usually Ships in 1-5 Days. Please note that sometimes a book is available on our website but not currently on the store shelves
Maisie Kentworth is stuck on the ranch. Having fallen in love with the wrong guy, she can't risk inflaming things between her former beau and her protective family. Left to rue her mistakes, she keeps busy exploring the idle mine at the edge of their property.

Boone Bragg is also stuck. With his parents on vacation, the management of Bragg Mining falls on him, and one of his advisors wants him as a son-in-law. One wrong move, and Boone will end up either offending an associate or getting married to a woman he can't endure.

While closing up a spent mine, Boone gets two surprises. One is an untamed farm girl who's trespassing with a pickax, and the other is the amazing crystal cavern that she's discovered. Suddenly Boone sees a way to overhaul the family business. With part of the cavern on Kentworth land, Boone makes Maisie a proposal that he hopes will solve all of their problems. Instead it throws Joplin into chaos.
Regina Jennings is a graduate of Oklahoma Baptist University with a degree in English and a minor in history. She's the winner of the National Readers' Choice Award and a finalist for the Christy Award and the Oklahoma Book of the Year Award. She lives outside of Oklahoma City with her husband and four children and can be found online at www.reginajennings.com.