The Angel of the Crows (Paperback) 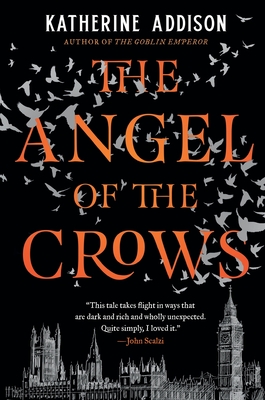 The Angel of the Crows (Paperback)

Katherine Addison, author of The Goblin Emperor, returns with The Angel of the Crows, a fantasy novel of alternate 1880s London, where killers stalk the night and the ultimate power is naming.

In an alternate 1880s London, angels inhabit every public building, and vampires and werewolves walk the streets with human beings in a well-regulated truce. A fantastic utopia, except for a few things: Angels can Fall, and that Fall is like a nuclear bomb in both the physical and metaphysical worlds. And human beings remain human, with all their kindness and greed and passions and murderous intent.

Jack the Ripper stalks the streets of this London too. But this London has an Angel. The Angel of the Crows.

KATHERINE ADDISON’s short fiction has been selected by The Year’s Best Fantasy and Horror and The Year’s Best Science Fiction. Her novel, The Goblin Emperor, won a Locus Award. As Sarah Monette, she is the author of the Doctrine of Labyrinths series and co-author, with Elizabeth Bear, of the Iskryne series. She lives near Madison, Wisconsin.