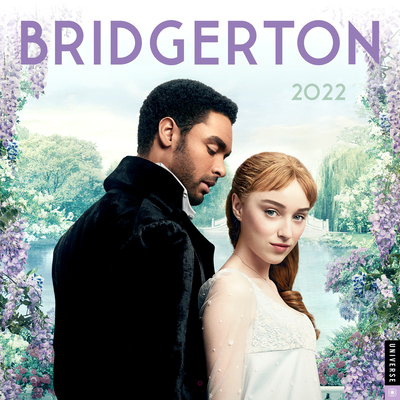 
On Our Shelves Now
The Bridgerton 2022 Wall Calendar  spans twelve months and showcases now-iconic cast of characters from the smash-hit Netflix series Bridgerton with a devoted fan base.

The Shondaland smash-hit Netflix show Bridgerton, a Regency-era romantic drama based on the popular books series of the same name, immediately spawned throngs of devoted fans the world over. Bridgerton features a winning formula—period-set wardrobes, lush city and country settings, a beautiful cast of characters, classic production design, and Jane Austen-like juicy storytelling by way of Gossip Girl. The Bridgerton 2022 Wall Calendar spans twelve months and showcases the now-iconic cast of characters from the bingeworthy show—the Duke, Daphne Bridgerton and her family, Lady Danbury, the Featheringtons, and Queen Charlotte, to name only a few—and is sure to appeal to fans of the show.
Netflix is a subscription-based streaming service offering online streaming from a library of films and television series, including those produced under the Netflix banner.
Shondaland is a television production company founded by television writer/producer Shonda Rhimes.