Heart on Fire: Susan B. Anthony Votes for President (Hardcover) 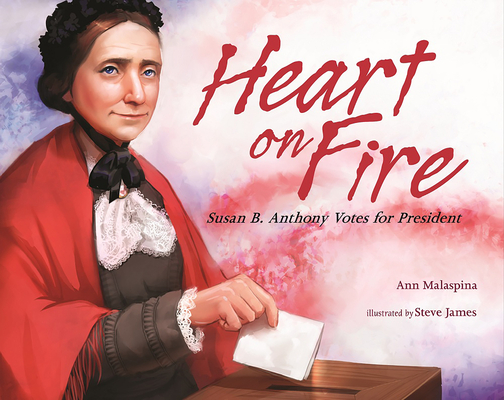 Heart on Fire: Susan B. Anthony Votes for President (Hardcover)

On November 5, 1872, Susan B. Anthony made history--and broke the law--when she voted in the US presidential election, a privilege that had been reserved for men. She was arrested, tried, and found guilty: “The greatest outrage History every witnessed,” she wrote in her journal. It wasn't until 1920 that women were granted the right to vote, but the civil rights victory would not have been possible without Susan B. Anthony's leadership and passion to stand up for what was right.

Ann Malaspina has written many books for children, including Touch the Sky: Alice Coachman, Olympic High Jumper and Finding Lincoln. She lives in New Jersey with her husband and two sons. Steve James has always enjoyed making pictures. Steve received his BFA in illustration from Brigham Young University, where he studied traditional painting techniques. He now lives in Lehi, Utah, with his wife.