Mindful Mixology: A Comprehensive Guide to No- and Low-Alcohol Cocktails with 60 Recipes (Hardcover) 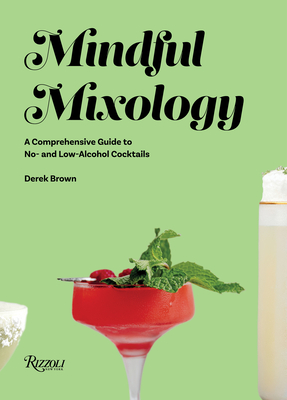 Mindful Mixology: A Comprehensive Guide to No- and Low-Alcohol Cocktails with 60 Recipes (Hardcover)


Usually Ships in 1-5 Days. Please note that sometimes a book is available on our website but not currently on the store shelves
From Dry January to Sober October, moderation is having a moment. This book from spirits expert Derek Brown (newly mindful drinker himself) will show the sober and sober-curious how to mix complex, sophisticated low- and no-proof drinks. It will include recipes, techniques, and sources.


Not long after his son was born, Derek Brown decided to cut back on his drinking. But as a bartender, bar owner, and cocktail and spirits expert, he wanted do so using the techniques and expertise of mixology to create a new arsenal of libations that were sophisticated, satisfying, and tasty.

Creating these drinks isn’t as simple as removing the alcohol. No- and low-proof cocktails still have to be balanced and still have to be delicious, but they don’t operate exactly like cocktails with alcohol. The drinks Brown presents in this book are meticulously choreographed around taste, texture, body, and piquancy to result in surprisingly complex “adult beverages” minus the booze. Drawing on historical research, meticulous tweaking of classic cocktails to create lower-proof versions, and entirely new concoctions inspired by an evolved home bar, in this book, Derek shares sixty recipes for no- and low-proof cocktails, as well as a guide to the ingredients and equipment you need to imbibe in Mindful Mixology at home.
Derek Brown is a leading spirits and cocktail expert best known for his work at Washington, D.C.’s 2017 Spirited Award-winning "Best American Cocktail Bar," Columbia Room. He is the author of Spirits, Sugar, Water, Bitters: How the Cocktail Conquered the World—which earned him "Author of the Year" at the 2020 Nightclub & Bar Show Awards. Equally recognized for his palatable non-alcoholic creations, Derek has become an advocate of non-alcoholic cocktails and the sober curious movement as a whole and, in 2020, joined Spiritless to serve as a brand champion and advisor for the budding distilled non-alcoholic spirits brand. Brown is also a Distinguished Fellow at Catholic University’s Ciocca Center for Principled Entrepreneurship and, in 2020, Drinks International named him one of the Bar World 100, a list of the top beverage figures effecting positive change in the global bar industry.
"The drinks visionary who helped usher in the era of craft cocktails beyond his hometown of Washington, D.C., Derek Brown has a new book out that reflects where he’s at as far as drinking is concerned: It’s Mindful Mixology: A Comprehensive Guide to No- and Low-Alcohol Cocktails, and it speaks to a decision to drink booze in moderation or to cut it entirely — while still enjoying drinks." —BROKENPALATE.COM

"Derek Brown’s Mindful Mixology offers some fascinating history behind NA drinks, as well as recipes and tips for making no- and low-alcohol cocktails." —WIRECUTTER