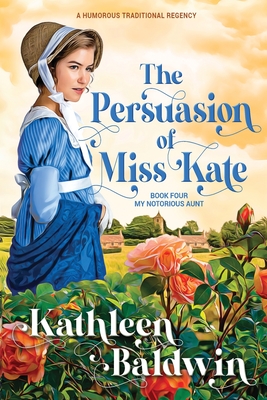 Miss Kate Linnet longs for independence above all else, but Lord Colter is determined to persuade her to marry.

Kate adores her younger sisters, but taking care of them ever since her mother died has her yearning for freedom. Or so she thinks.

Marriage is most assuredly not the answer. After all, with marriage comes more responsibility and inevitably more children. Even knowing that, two years ago, she agreed to marry Lord Colter. Devil take his boyish charm And those roguish dark eyes of his. She never should have said yes. And the more he pushed for a wedding date, the more she found fault with him. Finally, having had enough, he broke off their engagement in the middle of the Clapsforth-on-Wye assembly ball. During the cotillion

In front of everyone.

After such public humiliation, Kate wants to escape her crumbling life entirely. When her aunt, the notorious Lady Alameda, offers her a London Season, Kate readily accepts, but soon discovers her mischievous aunt is making her already troubled life worse.

Can Lord Colter rebuild the bridge between them, or will Kate let their chances at love and happiness slip through her fingers once again?

The Persuasion of Miss Kate is the 4th novel in the well-received Notorious Aunt series (originally published by Kensington). Since first publication more than 400,000 copies have been sold to readers world-wide.

Critical Reviews of other books in the My Notorious Aunt series:

"...a delight... laughter aplenty... sparkling dialog that left me with a smile on my face. I highly recommend this engaging Traditional Regency." - Cheryl Sneed, Rakehell Reviews

"...a charming book, with the lightness and freshness of a sunny day in the park." - Yvonne Choi, Rakehell Reviews

"...(Cut from the Same Cloth) will linger in your mind's eye long after you finish the story. Terrific " - Huntress Reviews, 5 stars

Kathleen Baldwin is an award-winning bestselling author with more than 600,000 copies of her books in the hands of readers around the globe. Publishers translated her books into several languages, and a Japanese publisher even made Lady Fiasco into a manga. Scholastic licensed Her alternate history series for teens for their school book fairs. The series won numerous awards and was optioned for film by Ian Bryce, producer of Spiderman, Transformers, Saving Private Ryan, and other blockbuster films. The series is currently in a third film option.

"A School for Unusual Girls, by Kathleen Baldwin, is enticing from the first sentence." -The New York Times Sunday Book Review