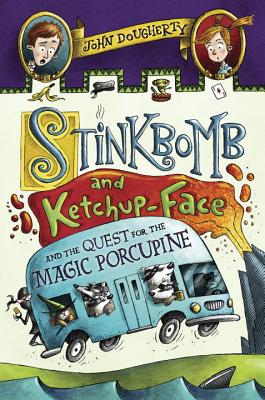 This is book number 2 in the Stinkbomb and Ketchup-Face series.

The BADgers are back in Stinkbomb and Ketchup-Face's second adventure, perfect for fans of The Stinky Cheese Man and Pseudonymous Bosch.

The villainous badgers have escaped from prison, and it's up to Stinkbomb and Ketchup-Face to find them and put them back! Only someone who knows about stories can point them in the right direction, so they consult Miss Butterworth, the Ninja Librarian.

After referring to a copy of Stinkbomb and Ketchup-Face and the Quest for the Magic Porcupine, Miss Butterworth sends them on their quest. Along the way they encounter raccoons who are definitely NOT badgers in disguise, a really REALLY long traffic light, a rabbit in a prickly coat, and a banana-eating hammerhead shark, all leading to a showdown with the badgers. Can the kids think fast enough to save the king from being shot out of the biggest water rocket in the world? We don't know. But we're going to read it and find out!
John Dougherty was born in Larne, Northern Ireland. He studied psychology at university and then tried his hand at a number of jobs including YMCA hostel worker, factory machine operator, and unsuccessful singer-songwriter, before becoming a primary school teacher. His books have been shortlisted for a number of prestigious awards - and one was chosen by The London Times as one of the Best Children's Books of the Year 2011 - but, more importantly, they make children giggle.

Sam Ricks is an illustrator and designer with more than ten years' experience. His work has been showcased in numerous publications, including The New York Times. Sam loves creating illustrations of all types, but he is especially fond of children's book work. He lives with his family in Utah. Twitter @Samuelricks Website samricks.com
“Picking up where the first adventure on the island of Great Kerfuffle left off, this sequel finds the bad badgers back on the loose after their cunning use of a Monopoly ‘Get Out of Jail Free’ card. . . After enduring a bus ride, a song about libraries, raccoons that are probably badgers, a banana-loving shark, an impressive diversity of typefaces, excessively long traffic lights, and a porcupine that is possibly magical but definitely a rabbit, Stinkbomb and Ketchup-Face use their mastery of story nonsense and a handy ‘Go Directly to Jail’ card to save the day. Dougherty's rollicking sendup and Ricks' accompanying spot art continue to amuse.” —Kirkus Reviews

"Wacky fun for those who enjoy the absurd." —School Library Journal