RFK Jr.: Robert F. Kennedy Jr. and the Dark Side of the Dream (Paperback) 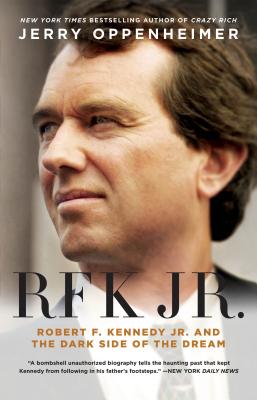 RFK Jr.: Robert F. Kennedy Jr. and the Dark Side of the Dream (Paperback)

“A bombshell unauthorized biography tells the haunting past that kept Kennedy from following in his father’s footsteps.” —New York Daily News

Robert F. Kennedy Jr. inherited his assassinated father’s piercing blue eyes and Brahmin style, earning a reputation as the nation’s foremost environmental activist and lawyer—the “toxic avenger”—battling corporate polluters. But in this, the most revelatory portrait ever of a Kennedy, Oppenheimer places Bobby Jr., leader of the third generation of America’s royal family, under a journalistic microscope, exploring his compulsions and addictions - from his use of drugs to his philandering that he himself blamed on what he termed his “lust demons,” and tells the shocking behind-the-scenes story of the curious events leading to the tragic May 2012 suicide of his second of his three wives, mother of four of his six children. If his late cousin JFK Jr. was once dubbed “Prince Charming,” RFK Jr. might have earned the sobriquet, “The Big Bad Wolf.”

Based on scores of exclusive, candid on-the-record interviews, public and private records, and correspondence, Jerry Oppenheimer paints a balanced, objective, but often shocking portrait of this virtually unaccounted for scion of the Kennedy dynasty. Like his slain father, the iconic senator and presidential hopeful, RFK Jr. was destined for political greatness. Why it never happened is revealed in this first-ever biography of him.

JERRY OPPENHEIMER is the New York Times bestselling author of Crazy Rich: Power, Scandal, and Tragedy Inside the Johnson & Johnson Dynasty, as well as unauthorized biographies of Hillary and Bill Clinton, Anna Wintour, Rock Hudson, Martha Stewart, Barbara Walters, Ethel Kennedy, Jerry Seinfeld, and the Hilton family. He has also worked in several different capacities as a journalist, including as an investigative reporter and a producer of television news programs and documentaries.

“A bombshell unauthorized biography tells the haunting past that kept Kennedy from following in his father’s footsteps.” —New York Daily News

"A fascinating portrait . . . For Kennedy watchers, and they are legion, this is an engrossing, nuts-and-bolts view of a tragic upbringing." —Booklist

"A harrowing tell-all biography of one of the political dynasty’s most controversial members . . . highly readable." —Toronto Star

“Followers of the dark side of the Kennedy legacy will want to read Jerry Oppenheimer's RFK Jr. and take in its treasure trove of new revelations. They will not be disappointed.” —David Horowitz, author of the groundbreaking The Kennedys: An American Drama (with Peter Collier ) and acclaimed biographies of the Rockefellers, the Fords, and the Roosevelts

“Jerry Oppenheimer has created a poignant and vivid portrait of Bobby Kennedy Jr. who was born to wealth and privilege but without love in his childhood. RFK Jr spent the rest of his life fighting his demons and addictions.” —Leonard Levitt, Edgar Award-winning author of Conviction: Solving the Moxley Murder

“This latest unauthorized biography from Oppenheimer...focuses on [Robert F. Kennedey, Jr.'s] long track record of bad behavior, including infidelity and substance abuse....[A] story of a flawed son of a flawed family.” —Publishers Weekly