Beyond Market and Hierarchy: Patriotic Capitalism and the Jiuda Salt Refinery, 1914-1953 (Paperback) 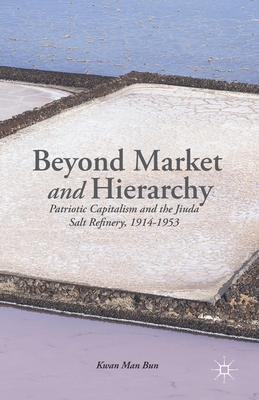 Beyond Market and Hierarchy: Patriotic Capitalism and the Jiuda Salt Refinery, 1914-1953 (Paperback)


Usually Ships in 1-5 Days. Please note that sometimes a book is available on our website but not currently on the store shelves
Based on extensive archival research, Beyond Market and Hierarchy reconstructs how Fan waged modern China's war of salts. Led by his Jiuda Salt Industries, the nascent refined salt industry battled revenue farmers who, as a group, monopolized the production and distribution of evaporated salt.
Kwan Man Bun is Associate Professor in the History Department at the University of Cincinnati, USA. He is the author of Tianjin jindai yansheng yu shehui (Tianjin renmin chubanshe 1999; reprinted 2010); The Salt Merchants of Tianjin (University of Hawaii Press, 2001), and articles on modern Chinese urban, economic, and business history.