Literary Titans Revisited: The Earle Toppings Interviews with Canlit Poets and Writers of the Sixties (Paperback) 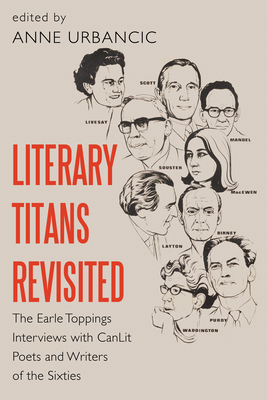 Literary Titans Revisited: The Earle Toppings Interviews with Canlit Poets and Writers of the Sixties (Paperback)


Usually Ships in 1-5 Days. Please note that sometimes a book is available on our website but not currently on the store shelves
Unearthed recordings reveal the early days of the literary powerhouses who gave birth to CanLit in the 1960s.

From 1969 to 1970, radio interviewer Earle Toppings recorded sixteen Canadian writers and poets who went on to become pillars of Canadian literature. These emerging icons of Canadian literature, including Margaret Laurence, Sinclair Ross, and Al Purdy, captured in Toppings's interviews and readings, give intimate and compelling views of their developing prose and poetry, in their own words.

The Earle Toppings tapes provide a distinctive and special glimpse into the workshops of emerging CanLit authors, revealing their thoughts about writing, about their successes and failures, about their place in Canada and in Canadian literature. This written version of Toppings's recordings presents exact transcripts of the spoken interviews, complemented by brief biographies and bibliographies. The interviews were carefully compiled by the inaugural group of four Northrop Frye Research Centre Undergraduate Fellows at Victoria College. This rare portrait would not have been complete without an interview with Mr. Toppings himself, sharing his personal recollections of the authors he recorded and his own insight into their works.
Anne Urbancic is Mary Rowell Jackman Professor of Humanities at Victoria College (University of Toronto). Along with Earle Toppings, her project collaborators are the Northrop Frye Centre Undergraduate Fellows of 2015-2016. She lives in Toronto.