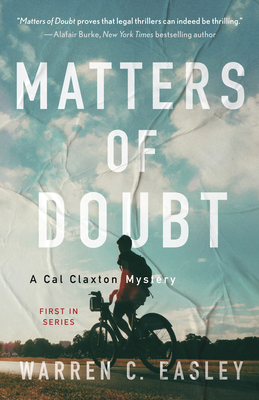 This is book number 1 in the Cal Claxton Mysteries series.

Who can you turn to when society spits you out?

Former LA prosecutor Cal Claxton has escaped to the Oregon wine country after his wife's suicide, determined to live a less-harried life. He's gotten a dog for company and takes pleasure in simple things like hiking, fishing, and crafting gourmet meals from the area's bounty, which he enjoys with local wines. He has no career ambitions, other than to sustain a small practice that will allow him to pay his bills. Then he's approached by a homeless street artist from Portland who wants him to take on the cold case investigation of his mother's murder. The young man believes his mother's boyfriend killed her eight years earlier, but the police were never able to solve the case. Cal turns him away. But his conscience won't let him rest…

Cal takes on the case against his better judgment. Soon, however, the street artist is charged with the boyfriend's murder, and Cal has to battle bias from the press, police, and public, along with his own doubts about his client in order to determine who has committed both crimes—and why.

Formerly a research scientist and international business executive, award-winning author Warren C. Easley lives in Oregon where he writes fiction, tutors GED students, fly fishes, and skis. Easley is the author of the Cal Claxton Oregon Mysteries. He received a Kay Snow National Award for fiction in 2012 and was named the Northwest’s Up and Coming Author in 2017, both honors bestowed by Willamette Writers. His fifth book, Blood for Wine, was shortlisted for a Nero Award.

“Warren Easley has created a character you can root for—a man who has experienced loss but still believes in a better future, a lawyer who vigorously pursues justice for the most vulnerable clients. Matters of Doubt proves that legal thrillers can indeed be thrilling. ” — Alafair Burke, New York Times bestselling author

"“This is a strong debut for Easley, who, although he isn’t a practicing lawyer himself, writes like he knows what he’s talking about. Cal, carrying a heavy load of guilt over the circumstances surrounding his wife’s death, is a well-designed, sympathetic character—definitely capable of carrying a series.” — BookList" — BookList