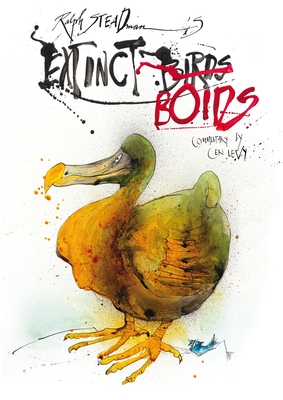 Ralph got carried away by the birds, taking Ceri with him ... this book details the discoveries they made on their travels through the savage seas of extinction. After stumbling on the previously hidden Toadstool Island,
where the extinct birds of the world live on in secretive harmony, the duo spent nearly a year in close proximity
to a host of fantastical avian creatures.

Ralph documents them all in this series of remarkable paintings, featuring unique interpretations of well-known
birds such as the Great Auk, Passenger Pigeon and Dodo, along with less familiar members of the feathersome firmament - Snail-eating Coua, for example, or the Red-moustached Fruit Dove - and a variety of bizarre beasts including the Gob Swallow, the Long-legged Shortwing and the Needless Smut. All are captured in a riot of expression and colour, with a slice of trademark Steadman humour.

Based on emails, diary entries and phone conversations, Ceri's accompanying text provides a running commentary, detailing the unfolding madness behind the creation of each piece in Ralph's extraordinary work. Things got tough as the pair discovered just how many amazing birds have been lost from our world forever.

"But," as Ralph said "it did, after all, make a nice change from drawing politicians".

Bloomsbury is proud to publish this unique title.

RALPH STEADMAN was born in 1936. He began his career as a cartoonist, and through the years has diversified into many creative fields. Ralph collaborated with Dr Hunter S. Thompson in the birth of 'gonzo' journalism, with Fear and Loathing in Las Vegas; he has illustrated classics such as Alice in Wonderland, Treasure Island and Animal Farm, and written and illustrated his own books, which include Sigmund Freud, I Leonardo and The Big I Am. Steadman is also a printmaker, and has travelled the world's vineyards, culminating in his books The Grapes of Ralph, Untrodden Grapes and Still Life with Bottle. Steadman's recent books for Bloomsbury include his epic collection of bird illustrations, Extinct Boids.

CERI LEVY is a film-maker, who started out making music videos before moving into the world of documentaries. His works include Bananaz, a film about the inner machinations of the group Gorillaz, and the forthcoming The Bird Effect; he is also co-curator of Ghosts of Gone Birds, and therefore a crucial cog in the boids' creation myth.

“Not since Adam named the beasts ... has anyone so enriched the language of ornithology as Mr. Steadman and his co-author, Ceri Levy, in Extinct Boids” —New York Times

“While Steadman gives us paintings of the dodo, the great auk and other familiar lost species in burning, unforgettable colours, we also find the nasty tern, the wizened twit, the dickie bird, the jail bird, and the lesser Peruvian blue-beaked blotswerve. The film-maker and conservationist Ceri Levy anchors it all in sanity with an appealing running commentary.” —The Independent

“Every turn of the page reveals a bird brought to life in Steadman's inimitable style.” —New Scientist

“Ralph's remarkable paintings... pay a tribute to some of the most beautiful creatures ever to have lived.” —The Lady

“Each species is splashed across the page in Steadman's unique style, accompanied by a witty and informative commentary by Levy” —The Guardian

“The national treasure that is Ralph Steadman utilises his trademark cartoon-style to document those “ghost birds” whose demise stands as an indictment of mankind's destructive tendencies.” —Sunday Express

“A riotous flight of imagination with a serious message” —Birdwatch