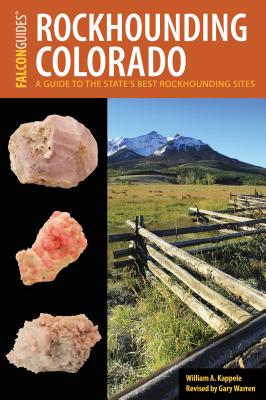 By William A. Kappele, Gary Warren (Revised by)


Special Order - Email for Availability
Rockhounding Colorado takes you to 100 of the best rockhounding sites in the state. Search for amethyst and quartz at the Crystal Hill Mine, check out the view at Douglas Pass while looking for leaf imprints and insect fossils, or head to Saint Peters Dome to uncover green, white, and purple fluorite.
Born and raised in Clearfield, Utah, Gary Warren (reviser) and his wife eventually settled in Brigham City, Utah. They have 4 children, 17 grandchildren, and 3 great-grandchildren. Gary has been a member of the Cache Rock and Gem Club, located in Logan, Utah, for 10 years, 8 of which he served as president. He enjoys sharing his love of rockhounding with children through school lectures and after-school group demonstrations and activities. The club has also incorporated a Junior Rockhounding program. Recently retired, Gary has more time to pursue his passions, traveling and rockhounding throughout Utah. William A. Kappele has been rockhounding across the West for more than forty years. His other books include Rockhounding Nevada and Rockhounding Colorado.