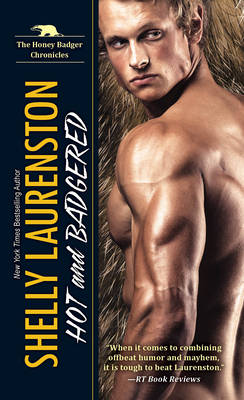 This is book number 1 in the The Honey Badger Chronicles series.

It’s not every day that a beautiful naked woman falls out of the sky and lands face-first on grizzly shifter Berg Dunn’s hotel balcony. Definitely they don’t usually hop up and demand his best gun. Berg gives the lady a grizzly-sized t-shirt and his cell phone, too, just on style points. And then she’s gone, taking his XXXL heart with her. By the time he figures out she’s a honey badger shifter, it’s too late.

Honey badgers are survivors. Brutal, vicious, ill-tempered survivors. Or maybe Charlie Taylor-MacKilligan is just pissed that her useless father is trying to get them all killed again, and won’t even tell her how. Protecting her little sisters has always been her job, and she’s not about to let some pesky giant grizzly protection specialist with a network of every shifter in Manhattan get in her way. Wait. He’s trying to help? Why would he want to do that? He’s cute enough that she just might let him tag along—that is, if he can keep up …
Shelly Laurenston is the New York Times and USA Today bestselling author of the Pride, Call of Crows, and The Honey Badger Chronicles, as well as winner of the RT Book Reviews Readers' Choice Award for her 2016 novel, The Undoing. When she’s not writing about sexy wolf, honey badger, lion, and other fang-filled predators, she's writing about sexy dragons as G.A. Aiken, the acclaimed and bestselling author of the Dragon Kin series. Originally from Long Island, she now lives on the West Coast and spends most of her time writing and making sure her rescued pit bull doesn’t love everyone into a coma. Please visit her online at www.ShellyLaurenston.com.