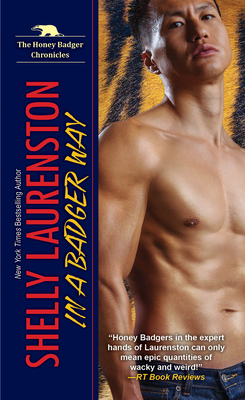 This is book number 2 in the The Honey Badger Chronicles series.

New York Times and USA Today bestselling author Shelly Laurenston follows the explosive success of Hot and Badgered with the second installment in her sizzingly outrageous series, this time featuring a heroine who is half tiger, half honey badger shifter, and fully living her truth.

Petite, kind, brilliant, and young, Stevie is nothing like the usual women bodyguard Shen Li is interested in. Even more surprising, the youngest of the lethal, ball-busting, and beautiful MacKilligan sisters is terrified of bears. But she’s not terrified of pandas. She loves pandas.

Which means that whether Shen wants her to or not, she simply won’t stop cuddling him. He isn’t some stuffed Giant Panda, ya know! He is a Giant Panda shifter. He deserves respect and personal space. Something that little hybrid is completely ignoring.

But Stevie has a way of finding trouble. Like going undercover to take down a scientist experimenting on other shifters. For what, Shen doesn’t want to know, but they’d better find out. And fast. Stevie might be the least violent of the honey badger sisters, but she’s the most dangerous to Shen’s peace of mind. Because she has absolutely no idea how much trouble they’re in . . . or just how damn adorable she is.

“Hot and humorous.”
—USAToday.com on Hot and Badgered

“Laurenston delights…Zany, sarcastic humor…Familiar, well-developed characters and full immersion into the universe make this a must-read for a new and returning readers alike.”
—Publishers Weekly on In a Badger Way

“In a Badger Way is pure, unadulterated fun. It’s ten pounds of bursting-at-the-seams excitement in a five pound bag…No one does it like Shelly Laurenston when it comes to unique, unparalleled heroines and the heroes who can’t help but love them. Even when they’re honey badgers.”
—Bookpage on In a Badger Way
Shelly Laurenston is the New York Times and USA Today bestselling author of the Pride, Call of Crows, and The Honey Badger Chronicles, as well as winner of the RT Book Reviews Readers' Choice Award for her 2016 novel, The Undoing. When she’s not writing about sexy wolf, honey badger, lion, and other fang-filled predators, she's writing about sexy dragons as G.A. Aiken, the acclaimed and bestselling author of the Dragon Kin series. Originally from Long Island, she now lives on the West Coast and spends most of her time writing and making sure her rescued pit bull doesn’t love everyone into a coma. Please visit her online at www.ShellyLaurenston.com.